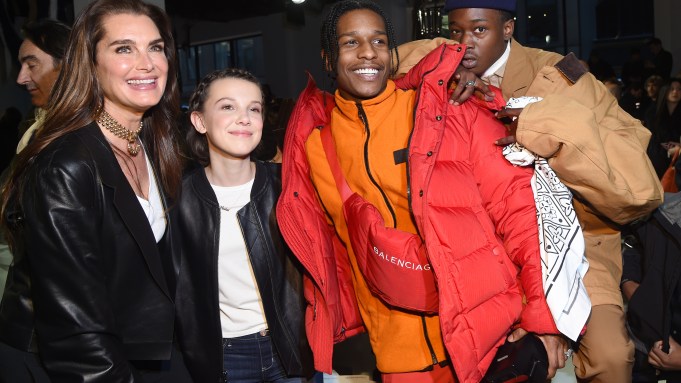 Brooke Shields at Calvin Klein: everything old is new again.

For Shields, whose famous 1980 ad campaign for the brand made her a household Calvin name, coming out for Raf Simons’ debut at Calvin Klein was a homecoming of sorts. “It’s both nostalgic and exciting — it feels like yesterday and at the same time it feels like a lifetime ago,” she said, after getting approval from a watchful publicist. “But it still feels like the perfect fit — and I’m not using a jeans analogy. No pun intended.”

The model and actress, who is about to begin work on a SiriusXM radio show, hinted that she’s working with the brand once again. “It’s been a long time since I’ve been able to collaborate with Calvin Klein, and the house of, and Raf asked me to be part of that,” she said. “I made it! My flight was one of the only flights that actually came in. I just flew in from L.A., but everything was canceled and so I left on the red eye last night. It is meant to be — everything conspired, literally!”

The collection featured an image of Shields’ iconic Calvin Klein denim ad on the back waist of the jeans sent down the runway, which she hinted is only the beginning. “I think this is going to end up taking more of my time than I realize,” she said.