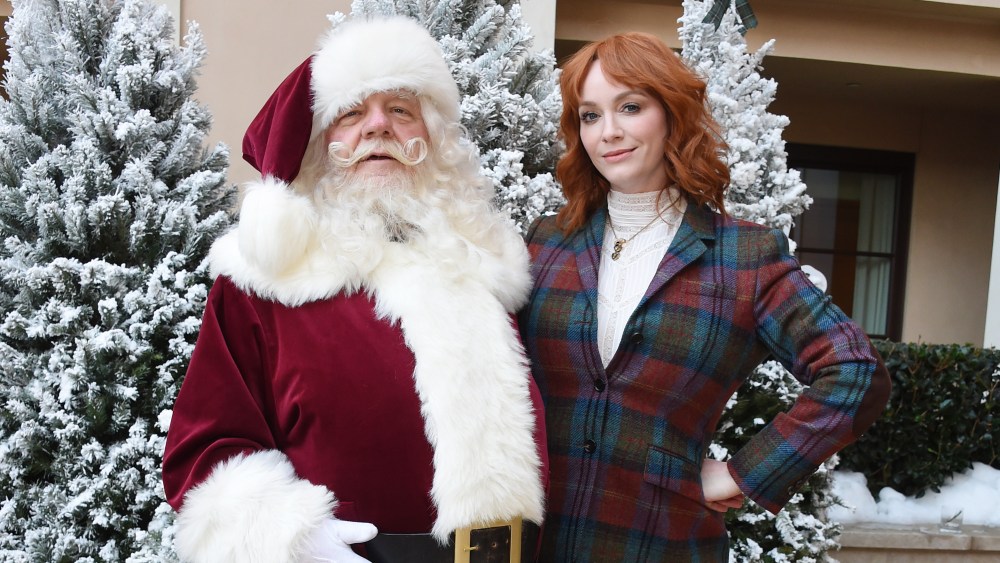 After a yearlong break due to COVID-19 that saw the brand’s sale to SPARC, the appointment of a new chief executive officer and head designer, Brooks Brothers was back in L.A. and ready to celebrate on Saturday afternoon.

The roof deck of the Maybourne Hotel in Beverly Hills was transformed into a festive playground with plenty of photo ops with Brooks’ sheep, Santa and Mrs. Claus, cocktails and crafts enjoyed by the largely tartan-clad crowd.

Christina Hendricks was hands-on at the cookie decorating table, but it was her former “Mad Men” castmate Jared Harris who took the holiday spirit award. He was wearing a “Team Nice” crown, while his wife Allegria wore a green tinsel Christmas tree dress and “Team Naughty” crown.

“It’s amazing to be out again and what charity is better than this one?” said Brooks Brothers’ new creative director Michael Bastian.

“This is my first time,” said Brooks Brothers CEO Ken Ohashi. “The most beautiful thing is we inherited an incredible brand and beautiful partnership with St. Jude, which we continue to believe in and will foster and grow.”

Taking the stage to introduce the afternoon’s entertainment, Ohashi thanked his nine-year-old son Andy for being a trouper and accompanying him on the 48-hour trip across country. “I hope you understand what this event is for,” he said, speaking to his son. “There are some kids out there really suffering with their parents, this is for them.”

The party was hosted by Rachel Zoe and Rodger Berman, Emma Roberts and Tia Mowry, with a performance of kid-friendly carols and other songs by Jana Kramer.

In 15 years, Brooks Brothers has raised more than $23 million for the fight against childhood cancers and other serious diseases.