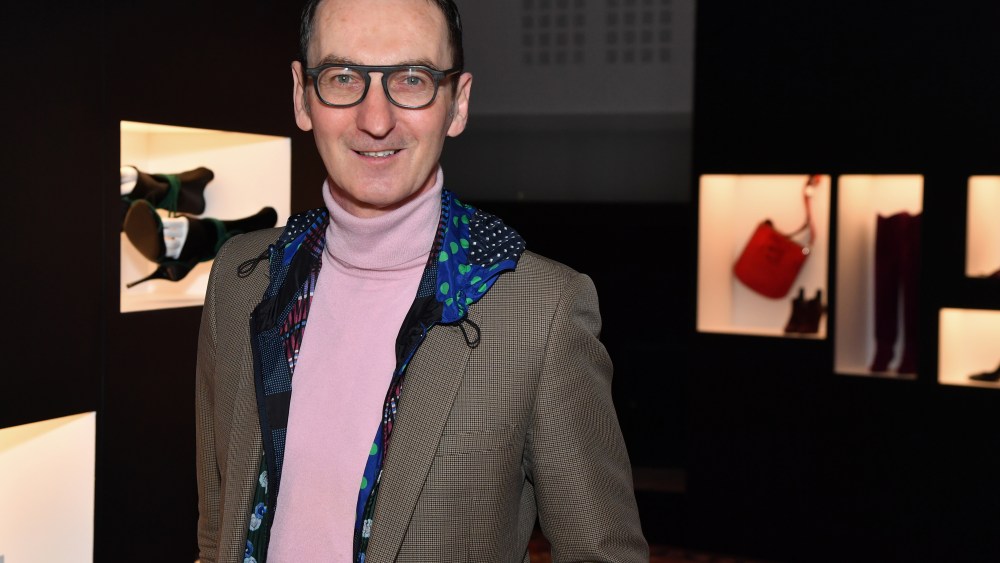 AU REVOIR: Bear hugs were the order of the day at the Tuesday presentation of the swan song collection by Bruno Frisoni for Roger Vivier. As reported, the shoe guru synonymous with the revival of the iconic French footwear house is set to exit the firm after a 16-year collaboration. His successor has yet to be named.

Frisoni was clearly moved by the flow of well-wishers, but kept his emotions in check. “There’s always a beginning and an end, but I think it’s very important to go through changes; fashion is all about changes. If it’s not the people, it’s the collections.

“At a point you feel you need to put yourself in a risky situation, you feel too comfortable in what you’re doing. You’re looking for new challenges and you see that they’re not coming where you are. That was probably what pushed me to make the decision,” added the designer, who had brand ambassador Inès de la Fressange by his side.

“Inès and I, we started this from scratch and we imprinted in people’s heads an old name as a new name. For sure, it’s a strong moment, but for the brand it’s also a strong moment because with what we achieved putting the brand together, there’s nothing not to be proud about,” he said. “It’s still a small company, but it’s an important name. We brought new classics, new femininity, recognizable pieces, and the brand has a long successful life ahead of it.”

“It’s true that when we started, the first question from people was, ‘Who was Roger Vivier?’ and now they no longer ask,” de la Fressange noted.

Frisoni’s eclectic collection was based on the idea of pick and mixing pieces, “as Diana Vreeland liked to do on a shoot.” In the mix were upscale combat boots with colored velvet laces, folksy snow boots, ponyskin knee-high boots with “wild kiss” embroidery and a medium heel and artisanal-chic ethnic raffia sandals. A beautiful pair of gold and black embroidered boots were inspired by a find in an antique store in Tangier, Morocco, Frisoni said.

“Actually it looks like five different collections, and that is the definition of luxury — to have a huge choice,” said de la Fressange.

Frisoni, who wound down his signature shoe line in 2011 after 12 years in business, said he would love to relaunch the brand if the right partner comes along. “I’m open to everything,” said the designer, who also hinted he’d like to have the freedom to work on a full collection, possibly including garments; “a bigger challenge.”