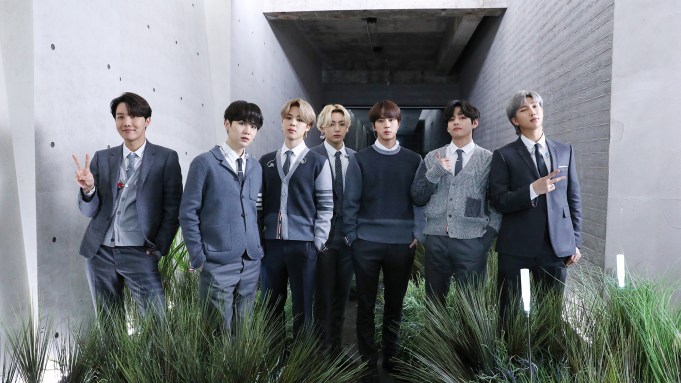 The hit K-pop group, comprised of RM, Jin, Suga, J-Hope, Jimin, V and Jungkook, looked to major fashion houses like Ralph Lauren, Gucci and Thom Browne for their performance, which was filmed in Seoul, South Korea.

BTS performed five songs during the “MTV Unplugged” performance, including tracks from their 2020 album “Be” like “Telepathy,” “Blue & Grey,” “Dynamite” and “Life Goes On.” They also sang a surprise cover of Coldplay’s “Fix You.”

For “Life Goes On,” BTS wore matching Polo Ralph Lauren suits in varying shades of brown and coordinating fabrics and textures, such as a mixed plaid and houndstooth suit jacket and a brown suede suit jacket.

BTS later wore Gucci for their performance of “Telepathy,” which was staged in a living room decorated with arcade games and motorcycles. The members wore casual pieces from the design house, including a bedazzled denim jacket, striped sweaters, flannels and collegiate-inspired jackets paired with graphic T-shirts.

BTS has grown to be a formidable influence in the fashion world since the K-pop group came together in 2013. BTS signed with Fila as global brand ambassadors in October 2019 and later launched a capsule collection with the brand the following year. They also teamed with Louis Vuitton for the design house’s fall 2021 men’s collection to create a teaser campaign that explored themes of racial identity and cultural appropriation. The video was viewed more than 105 million times.

They also made it onto Vanity Fair’s Best Dressed List in 2019 and were named Time Magazine’s Entertainer of the Year in 2020.

Click through the above gallery to see more photos of BTS from their “MTV Unplugged” performance.