The actress and model appears in a campaign lensed by Peter Lindbergh featuring the new “Opera” collection. 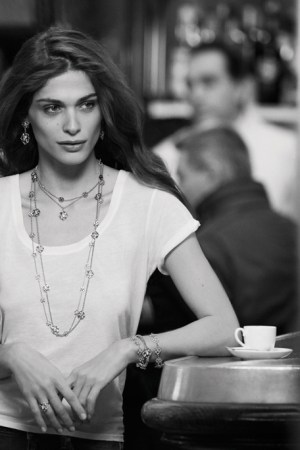 GOLD RUSH: Elisa Sednaoui turned out in a white Ermanno Scervino dress and Buccellati jewelry for the cocktail hosted by the high jeweler in Paris’ Hôtel Salomon de Rothschild.

The event that also drew Alexis Mabille and Johannes Huebl celebrated the company’s new Opera collection and its campaign lensed by Peter Lindbergh featuring Sednaoui in various Milan locations, such as the Duomo and the Museo del Hotel.

The actress and model is set to host the inauguration and closing ceremony of the 72nd Venice Film Festival in September.

“For me, it’s really about culture, and as an Italian, I am very honored. Speculation about the opening film is either it’s one starring Ethan Hawke and Emma Watson or one by Quentin Tarantino,” she said.

“It’s all gold,” said Lucrezia Buccellati, the 26-year-old designer who works alongside her father, Andrea Buccellati, in the family company headquartered in Milan.

The slender blonde, the mother of a one-year-old, is to participate in the Hamptons Classic in late August.

“It’s a really great horse show. Last year, Mary-Kate Olsen was in my class,” she said. “I ride my own horses — one is named Pandora, the other one is Baltic Sun.”

The campaign starts rolling out in magazines worldwide this month, with visuals being released starting in September.