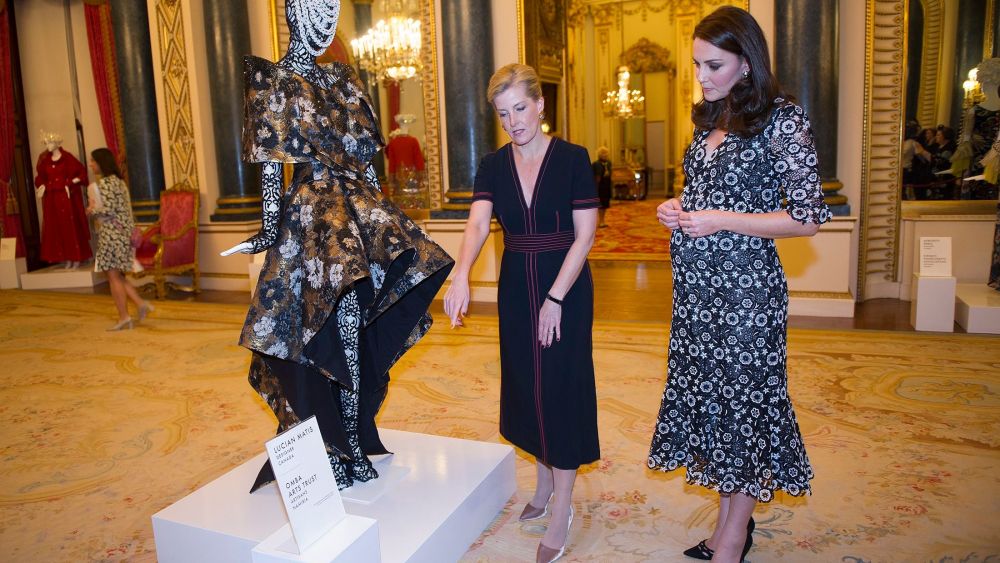 ECO-LOGICAL: The Duchess of Cambridge hosted a reception at Buckingham Palace on Monday evening to celebrate The Commonwealth Fashion Exchange. The initiative is a project launched by Livia Firth, founder of Eco-Age, and Patricia Scotland, the Commonwealth secretary-general, to promote sustainable fashion among the Commonwealth nations, most of which are former British territories.

The scheme united designers and artisans from Commonwealth countries, who created 52 exclusive garments, with Burberry and Stella McCartney representing the U.K. Each look was made following strict sustainability guidelines.

“This is a project rich in partnerships and creative codesign,” said Firth. “As someone who is passionate about joining the threads of global fashion and creating real partnerships, you can imagine how exciting it is for us to be involved.”

The garments were exhibited at a reception curated by Vogue’s international editor-at-large, Hamish Bowles. Guests included Naomi Campbell, Adwoa Aboah, Caroline Rush, Anna Wintour and Edward Enniful. The duchess wore a patterned guipure lace ensemble from Erdem and was accompanied by the Burberry-clad Countess of Wessex.

An edited selection from the initiative will be sold on Matchesfashion.com in September. Ulric Jerome, chief executive officer of the e-tailer, said: “The most resilient and sustainable supply chains in fashion are based on collaboration and, fundamentally, that is what we are seeing created by The Commonwealth Fashion Exchange.”

Other partners include Swarovski, The Woolmark Co. and NEST. The designs showcased at Buckingham Palace will move to a public exhibition at Australia House in London from Feb. 22 until March 6.