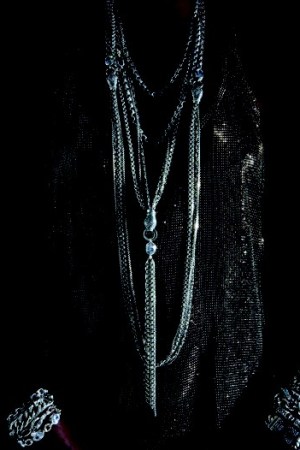 CHAIN GANG: Glitzy French fashion brand Barbara Bui is launching a silver jewelry line, to be unveiled Nov. 26 at its Rue du Faubourg Saint-Honoré store. “I wanted it to be at once contemporary and timeless, based on the simple dynamic of chains,” said Barbara Bui of the rock ’n’ roll line, dubbed Atame, that comprises multistrand necklaces and chunky bracelets inspired by men’s chain-link bracelets. Certain pieces feature embossed snake-inspired details and rock crystal stones.

DIFFERENT TUNES: Fendi’s party in New York for the new book “John Baldessari: A Catalogue Raisonne of Prints and Multiples, 1971-2007” by Sharon Coplan Hurowitz started off like most store events. A smattering of well-heeled types including Brooke Shields mingled among the racks of luxury goods and admired the artwork brought in for the occasion, while Hurowitz greeted well-wishers. But after a brief speech by the author, the evening became much less conventional. Rock-jazz pianist Eric Lewis (aka ELEW) took to a piano in the middle of the store and tickled the ivories. But instead of the standard cocktail party tunes, the musician pounded out pop covers including The Killers’ “Mr. Brightside.”

HOME COUNTRY: In Milan, a slew of designers turned out for the premiere of “Valentino: The Last Emperor,” now on the shortlist of the Oscar nominations for best documentary. Reacting to the news, Valentino mused, “What can I say? An Oscar would be an incredible crowning for an emperor.”

On Thursday night, a perky Valentino teased red-carpet photographers by imitating them as they called out, “Left! Right, maestro!” He did become quite emotional, though, when he saluted Giorgio Armani, who said the praise for Valentino was well-deserved. But when asked whether he would want to take part in a documentary, Armani replied, “Maybe it’s a bit late for me. Valentino enjoys this sort of thing, myself no.” Giancarlo Giammetti, instead, gushed about the turnout in Milan, and on how “we’ve never done an event like this here.”

Director Matt Tyrnauer was happy to move on to a different subject for his next film, stating, “I’m retiring from fashion, unless Dolce & Gabbana call me in the morning.” Attendees included Naomi Campbell with Vladislav Doronin; Allegra Versace, who slipped past the media on her way in and out; Margherita Missoni, and Italian TV personality Simona Ventura, who appears a number of times in the film.

SURFACE ON FIRE: After collaborating with French electro group Justice, Paris-based fashion label Surface to Air has tapped rock band Kings of Leon for their next capsule collection. Dubbed S2A x KOL, the men’s line, which boasts ready-to-wear and accessories, will be sold starting January at the Surface to Air store in Paris as well as key retailers worldwide, including Barneys New York. Prices range from 70 euros, or $104, for a bandana to 800 euros, or $1,194, for a leather jacket.

PARIS IN THE SPRINGTIME: Giles Deacon, who showed his spring collection in Paris as winner of this year’s ANDAM award, will continue to show in the City of Light. “Sales were up 42 percent for the spring collection, and a lot of new buyers came to the show,” he said during a Q&A session with James Ogilvy at the annual Luxury Briefing Conference in London. “I work in London, I employ people here, but I need to look at the bigger picture,” he said. Deacon had, until October, been showing during London Fashion Week. Deacon added during the talk that he will be working on a line of stationery for Harvey Nichols, and a very small range of cycle clothing for the London shop 14 Bike Co.

NO DEAL FERGIE: Sarah Ferguson and QVC have apparently nixed plans to jump into the apparel pool with a line for TV viewers. This ends months of speculation the Duchess of York would be adding designer to her title. However, there is still talk the flame-haired royal will develop other products for QVC. Earlier this week, Tommy Hilfiger denied reports he was working with her, saying they are just friends.

LIVE WIRE: Kenzo, the fashion house owned by LVMH Moët Hennessy Louis Vuitton, is launching an e-commerce boutique at kenzo.com. Slated to go live next week, it will offer clothes for women, men and children, along with accessories and fabrics, for Europe-wide delivery. The plan is to offer limited edition items and exclusive products. For the launch, these include notebooks in aid of a children’s charity. The French fashion house plans to extend e-commerce to the United States in 2011 and Asia the year after.

GREEN CROSS: French designer José Lévy is a man of many hats. He’s conceived everything from men’s and women’s clothing to bed linens and carpets. Now Lévy has created the inside of a pharmacy, called MaPharmacie, a hop from Paris’ Place de la Bastille. Its streamlined interior is chockablock with mirrors, tiles, fake medicinal plants and fluorescent lighting. Numerous flat screens, mostly visible street-side, display images of products on offer. Over the door hangs a traditional pharmacy’s green cross, which Lévy also reworked with a modern twist.

LONDON DIGS: Fifi Chachnil, known for her girly, retro-inspired lingerie creations, is headed to London. The French designer revealed she’s due to open a store there Dec. 12 on Beauchamp Place in South Kensington, in a former shoe shop. The brand was previously distributed by Agent Provocateur for 15 years. “This will help strengthen our image. It’s a lovely road with shops selling old hats and cocktail dress,” said Chachnil, who plans to throw a store-warming bash in January.