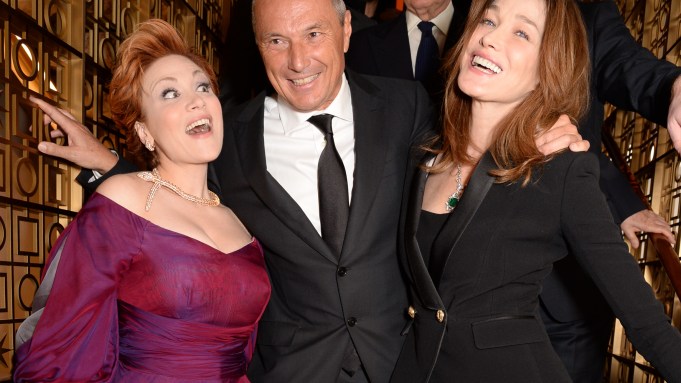 ROMAN AFFAIR: Bulgari celebrated the reopening of its redesigned London flagship on New Bond street, with a red-carpet affair inspired by Italian glamour, on Thursday evening.

The Italian jeweler enlisted Peter Marino on the design concept, who took a cue from the house’s Via Condotti flagship in Rome and incorporated marble-inspired designs in the store.

According to Marino the original inspiration came from one of Bulgari’s most famous clients, Elizabeth Taylor. “She serves as the perfect ideal — a glamorous, feminine muse and inspiration for Bulgari’s new look,” he told WWD.

A number of famous faces were also present last night to fete the redesigned store, including brand ambassadors Luke Evans and Carla Bruni.

Bruni and Evans joined Nicola Bulgari, the grandson of founder Sotirios Bulgari and the label’s chief executive officer Jean-Christophe Babin for a brief ribbon-cutting ceremony, before inviting guests to join the celebrations inside the store.

Bruni mused about her favorite Bulgari jewels; “I like stacking B.zero1 rings. They really dress up my hands well when I play guitar and sing on stage. I have them in all kind of materials. My favorites are the black and the white ceramic as well as the new 3-gold version,” she said.

According to Bulgari’s U.K. managing director Vincent Reynes, Bruni is a perfect embodiment of the brand’s aesthetic. “We look for women of taste with strong personality,” he told WWD. “Whether they are 18 or 65. Wearing the Serpentine necklace is not an easy thing, you have to make sure you are wearing it rather than it wearing you, so you need character,” he said.

Aiming to bring the feel of Rome to London, illuminated projections of Roman icons were featured at the storefront and guests were treated to a stage performance by Italian opera soprano Carmen Giannattasio, who sang “O mio bambino carro” accompanied by a live piano performance by Angelo Villano.

A magic show by David Jarre followed Giannattasio’s performance and as the evening unfolded, Jarre continue to wander around the store, stunning guests with his magic tricks.

Upstairs, the selling floor was transformed into a dance floor with guests chatting and dancing the night away to DJ Hen Yanni’s music.

“We wanted to create an atmosphere similar to that in the Fifties and the Sixties when people used to have fun. This room could easily be a room in a palace in Rome,” Reynes told WWD. “We also wanted to evoke Italian-ness with this event and the store. There must be an effortless attitude along with the sophistication, because we are Romans, you know?”