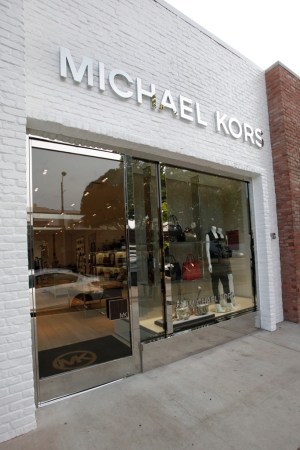 BULKING UP: California has the highest concentration of Michael Kors stores — and it is just getting more concentrated. The brand opened its 24th store in the state and its 10th in the Los Angeles area at 108 North Robertson Boulevard, less than two miles from the Michael Kors store on Rodeo Drive in Beverly Hills. The 2,000-square-foot Robertson store is in the brand’s lifestyle format selling a mix of Michael Kors accessories and Michael Michael Kors collections, while the Rodeo Drive store is in the collection format carrying a wide range of Michael Kors ready-to-wear and accessories. “I can see both stores benefitting from the proximity of the other,” said Kors, who noted the Robertson store will have a “younger, hipper vibe” than the Rodeo store and be a bit more “fashion-forward” than his mall locations. On Wednesday night, the store officially launched with a party hosted by Petra Flannery and attended by Zoe Saldana, Alexandra Richards, Minka Kelly and Kate Mara.

Although Kors couldn’t make it to the party, he’s been a frequent visitor to Robertson and has had his share of celebrity run-ins on the street. Harkening back to one such run-in with Janice Dickinson outside The Ivy restaurant, he recounted, “While we waited for our cars and caught up, she offered me cookies that she was taking home after lunch and fed them to me whilst the paparazzi captured the whole moment. Only on Robertson.”