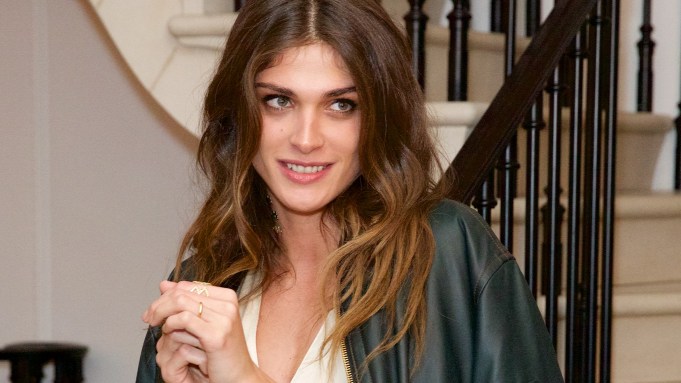 ALL ABOUT ELISA: Elisa Sednaoui Dellal joined Mytheresa.com’s president Michael Kliger and buying director Justin O’Shea at an intimate dinner hosted by Burberry and the e-tailer at the label’s restaurant, Thomas’s, on Sunday night. The model, actress and philanthropist is the latest face to join the ensemble of women who have appeared in a series of films showcased on Mytheresa.com.

Alexa Chung, Daisy Lowe and Alice Dellal were among the guests who attended to show their support — as well as Dellal’s godfather Christian Louboutin, who came to London for the day.

“I heard about the lobster so I can’t wait,” said Louboutin of his first visit to Thomas’s restaurant. “I’m allergic to fish but not to lobster so I’m going to see.”

Dellal met the Parisian shoe designer when she was 8 years old in Egypt when her father was building their house.

“I went to New York for my first time when I was 18 years old,” said Dellal. “People were asking him ‘Who is this girl that you’re with?’ and that was the time that he said, ‘She’s my goddaughter,’ so since then I have called him my godfather in a way because it’s kind of a mentorship and support in that sense. He’s been supportive in terms of fund-raising. We are doing a fund-raising gala in Knokke. There’s a Knokke Fashion Weekend, a fashion event that has been created for the first time in Belgium and the organizers of the event decided to give the proceeds of their first “Friends with Benefit” gala to the foundation. So Christian will always come in and try to support in this type of situation by donating items or donating unique experiences of getting to meet him or signing shoes or things like that.”

Dellal recently traveled to Lebanon, on her first mission with the United Nations, to visit refugee settlements. She will head to Egypt with her foundation and Youssef Nabil, an Egyptian photographer to run a workshop. The model is also working with Jaeger-LeCoultre and  Louboutin on their collaboration on the Atelier Reverso line.

Lowe noted that her Pamela Love campaign is due out soon and is working on a few films including “Tulip Fever” starring alongside Cara Delevingne. “I’m excited about ‘Tulip Fever’ coming out, that will be good,” added Lowe. “I’ve got a little role, I’m excited about it, Judi Dench is in it so that is very exciting.”

A short movie will run alongside Dellal’s shoppable edit of pieces from Burberry’s spring collection.

In the video, the model is seen donning the brand’s black trenchcoat, military-style jacket with gold buttons, a floor-sweeping silk dress, a long black and white lace dress and an olive knapsack.

Dellal is the 11th female to be featured in the series, which are presented on Mytheresa.com. Previous subjects include Liv Tyler, Carine Roitfeld, Alexa Chung, Victoria Beckham, Diane Kruger, Brooke Shields and Clémence Poésy.