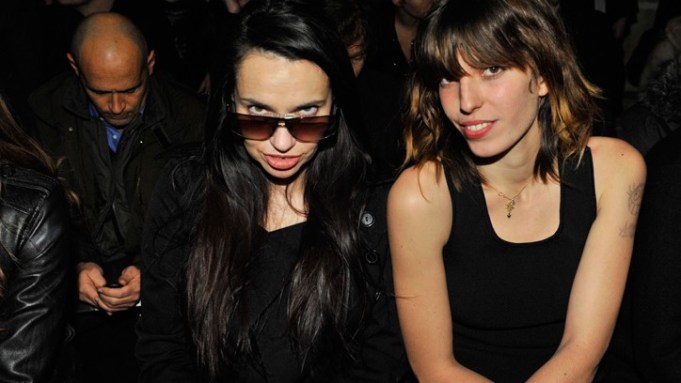 View ALL 3 Photos
GOLDEN GIRLS: Filmmaker, jewelry designer and writer Liz Goldwyn is to add yet another string to her bow; opera. “It’s good to keep experimenting,” she said at Givenchy’s show Tuesday night, where guests included Emmanuelle Seigner and Lou Doillon. Goldwyn, who’s working on the opera project in London, is also turning deejay alongside French actress and singer Joana Preiss at Paris hotspot Le Baron this Saturday. “It’s going to be a mix of old soul, hip-hop and Sixties girl groups,” Goldwyn said. Italian actress Anita Caprioli, meanwhile, is hoping her latest movie “Good Man Aman,” about a boy from Somalia, will be selected for either the Cannes or Venice film festival. “I play a girl he meets, she’s borderline crazy,” she related. Fashion fixture Roisin Murphy, due to make a runway turn for Alexandre Vauthier, said her design for H&M’s Fashion Against Aids collection hits stores soon. The Irish songstress is attending fewer shows after tiring herself out last rtw season when she was pretty much everywhere. “I needed a good meat pie and some television at the end,” she laughed.
Newsletters