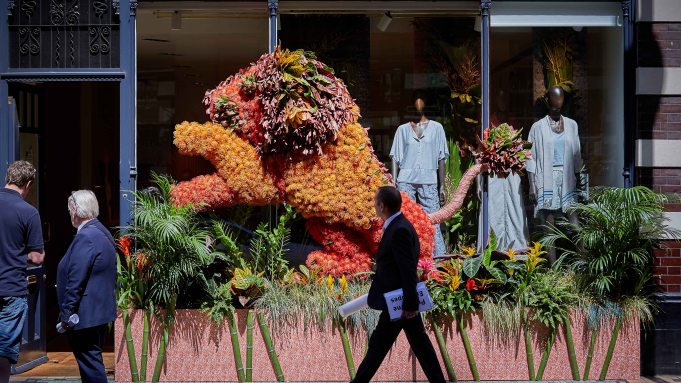 FLOWER POWER: One of central London’s largest property owners has been capitalizing on the annual Chelsea Flower Show to promote retail in the neighborhood. The Cadogan Estate — which looks after properties throughout Chelsea and Knightsbridge — said its Chelsea in Bloom Retail initiative has been drawing increasing footfall — and greater attention — to the neighborhood.

This year’s initiative saw 50 West London retailers take part, mounting floral displays around the time of the Chelsea Flower Show, which wrapped up last weekend. The five-day flower show, the most important in the U.K., is hosted by the Royal Horticultural Society and held at the Royal Hospital Chelsea.

Hugh Seaborn, chief executive officer at the Cadogan Estate, said the event typically had about 30 businesses taking part, but saw the number rise to 50 this year, with footfall in Chelsea up 25.6 percent last week during the flower show.

“It is so important to support brick-and-mortar stores at the moment because the online experience is growing faster than brick-and-mortar sales,” said Seaborn. “We allow retailers to showcase their retail proposition in a way that can’t be matched online. What we are trying to achieve is to make a whole area exciting and dynamic to potential customers. It also enhances the area in the long term and increases its identity.”

“There hasn’t been a moment so far this week when we haven’t had a large crowd gathered around our windows,” said jeweler Kiki McDonough, who counts the Duchess of Cambridge among her clients. Her store is located on Symons Street, just steps away from Kate Spade and J. Crew.

“We’ve gained 1,500 Instagram followers over the last couple of days and I’ve had notes from customers around the world. Locally, we notice a sense of excitement building from around March — people really look forward to it.”

The buzz hasn’t ended with the show. Seaborn said the area is set to get seven restaurants that will open over the next few months, including one by the Australian celebrity chef Bill Granger. It will open on Pavilion Road next month.