California’s PQ Swim Expands Into Loungewear and Lingerie, Collaborates With the Herbert Twins

The line is out today.

PQ Swim is expanding into loungewear and lingerie. The swimwear company, based in San Diego, Calif., has partnered with Instagram influencers Elisha and Renee Herbert — known as the Herbert twins — to launch a capsule collection, out today.

“It was really a toss-up between ath-leisure and loungewear,” said PQ Swim owner and designer Amber Delecce, who founded the brand 10 years ago. “We pivoted in this direction [with loungewear] a bit more based on the climate, based on what we felt our customers would be doing. If they weren’t going away, they’d be staying home. We wanted to capture that category and offer the PQ girl something to lounge in versus going to Tahiti for Christmas, which was maybe her previous plan.”

The Herbert twins represent that PQ Swim girl, continued Delecce. The brand’s consumer is trend conscious, “whimsical and loves to travel,” but due to the pandemic, she’s now looking for comfort.

“We literally live in swimwear,” said Renee Herbert. Though based in Los Angeles, the twins are from Australia. “We were always traveling to tropical places….As soon as the whole pandemic started we started wearing loungewear and being obsessed with it.”

“Literally every girl is so into loungewear right now,” chimed in Elisha. “Everyone is at home. Loungewear has become the new trendy thing. We wear loungewear out now.”

“They are super cute, very on brand for PQ,” Delecce said. “They are very much our target market.”

The launch marks PQ Swim’s third collaboration with social media influencers. The brand has also released collections with Helen Owen, as well as twins Ava and Leah Clements, who have more than 1 million Instagram followers on their respective accounts. The Herbert twins have more than 1.5 million fans each on the platform.

“Social media has completely changed the marketplace,” Delecce said. “It’s just an easier way to home in on a demographic that’s right for your brand. Their girl is our girl.” 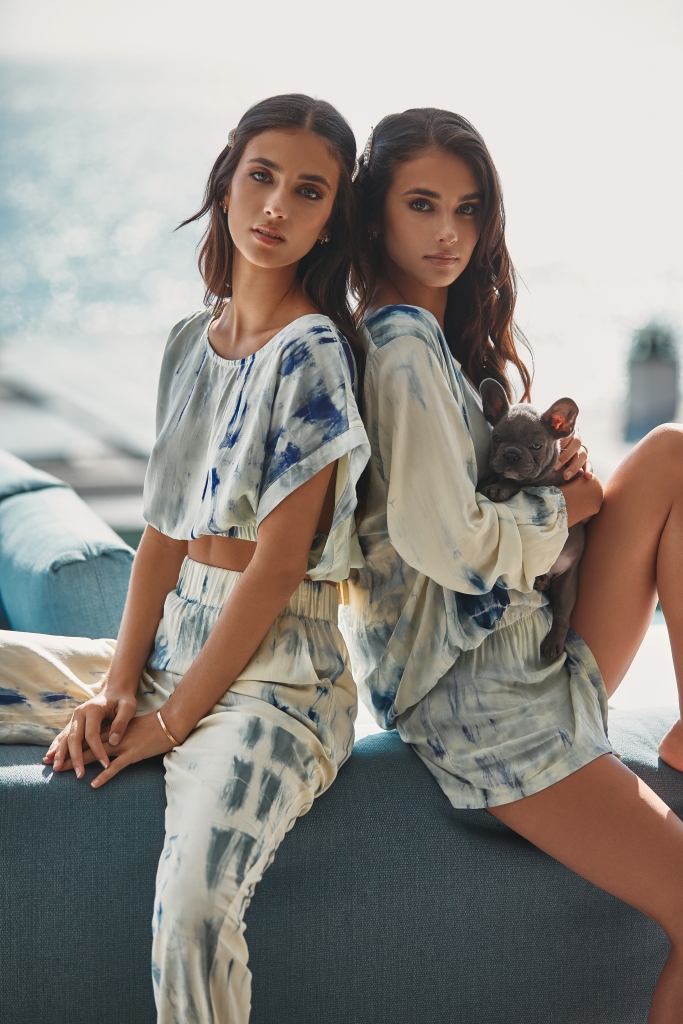 Priced between $48 and $132, the collection features lingerie, a slipdress, robe, lace shorts and matching loungewear sets in linen and tie-dye. The line is available direct-to-consumer at pqswim.com, as well as at retailers Revolve and Everything But Water.

Swimwear was hit hard in March, then picked back up in the summer starting in June, said Delecce: “And now we’re seeing a downward trend in swim. It’s really been a rollercoaster.”

Along with loungewear, the brand has pivoted to produce masks this year.

“It was really a challenging year,” continued Delecce. “It still is. You have to have that ‘I’m going to make it’ mentality. That determination is really what helps you survive….Our big goal right now is really just to make it to spring. We are anticipating full speed ahead come springtime with swim. That’s our plan in terms of long-term goal. And with loungewear, it’s a big deal for us to branch off into this category. It’s a big gamble, but I feel you need to spread yourself a little bit thinner as a brand and have your hands in more pies, if you will, just to sustain and maintain through this time.”