SNEAKER GODS: There were bright Nikes, branded hoodies and baseball caps as far as the eye could see.

The Parisian streetwear community flocked to the opening of “StockXchange” on Thursday, a three-day exhibition celebrating the best of French street culture organized by online consumer marketplace StockX. Located on the buzzy Rue de Paradis in the 10th arrondissement, it runs until Nov. 17.

In collaboration with Sarah Andelman, former creative director of Colette and founder of consulting company Just an Idea, StockX tapped a selection of curators to scroll through its inventory and present their vision of what’s exciting in French streetwear today, mixed in with a couple of their personal pieces.

These collaborators include Stéphane Ashpoole, founder of Pigalle Paris; Michael Dupouy, author of cult sneaker anthologies “All Gone”; Angelo Baque, founder of Awake and former brand director for Supreme; Ruba Abu-Nimah, creative director of Revlon; DJ and music producer Pedro Winter as well as Andelman herself, who pulled a selection of collaborative items from the site, such as a Jean-Paul Gaultier x Supreme T-shirt or a pair of Off-White Converse.

Other pieces presented include a Supreme teddy bear, rookie trading cards of Michael Jordan and a pair of Off-White x Air Jordan 1 Retro High OG sneakers, which retail on StockX for $3,800. 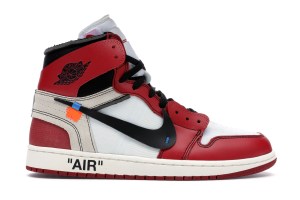 Moments before a talk about the importance of France in the streetwear movement featuring some of the curators as well as StockX founder Josh Luber, Scott Cutler, chief executive officer of StockX, stepped onto the stage to announce an exclusive drop expected in the next couple of weeks.

Thirty pairs of Nike Air Jordan 1 created in collaboration with the now-closed Colette will be raffled on the web site, with all proceeds going to Oceana, a nonprofit organization dedicated to preserving the oceans. His announcement elicited excited gasps from the audience, as the limited-edition kicks are a collector’s item.

“We wanted to show the importance of Paris as the intersection of art, tech, fashion, music, sneakers and streetwear,” Cutler told WWD. “As a digital marketplace, it was important for us to hold a physical event to celebrate our presence here in Europe but also to bring together artists and close collaborators.”

Asked about why resell platforms are gaining such momentum, Cutler offers a one-word answer: democratization. “We provide a unique opportunity to have democratized access to the world’s most sought after things, in a way that is transparent and fair for people,” he said. “You don’t have to wait in a line or buy it in a store, and you can be anywhere in the world — we provide access to those things.”

StockX mirrors a traditional stock market, showing the real-time trade value of products, which at the time of its launch in 2016 was exclusively sneakers. In 2017 it added watches, handbags and a streetwear vertical, as well as a collectibles vertical this year. In june, the company closed its series C funding round for $110 million, which increased its valuation to $1 billion.

“At first I was stunned to see that a product that had just launched was cheaper on StockX than in stores,” said Andelman, who has both bought and sold on StockX. “In addition to being an easy and instinctive marketplace, StockX is a great data provider for brands who can track the desirability of their product in real life, as the price evolves depending on demand.”

She also praised its authentification service. “When I went to visit the authentification center in Detroit, I was handed two Nike Jordan Travis Scott sneakers, one real and one fake. Even I got it wrong, thinking the bootleg was the real deal. It was a tipping point for me: I realized that StockX is more than a marketplace — it’s a service.”