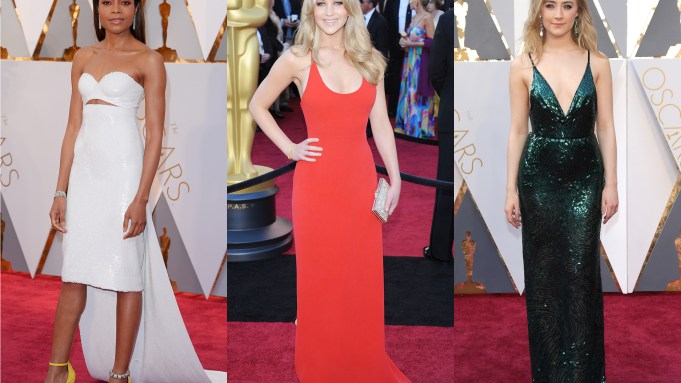 With news hitting Wednesday that Calvin Klein is shuttering its collections business, it was also announced the brand is ceasing its “by appointment” business, too, meaning Calvin Klein will no longer be a fixture on the red carpet.

The news comes after the brand decided to shutter its 205W39NYC business in January following the departure of chief creative officer, Raf Simons, the prior month.

Under the design leadership of Francisco Costa and Simons, Calvin Klein produced a number of standout red carpet looks during awards season, showing off the brand’s signature minimalist aesthetic on the likes of Lupita Nyong’o, Nicole Kidman, Lady Gaga and more.

In 2005, supermodel Elle Macpherson made headlines in a bright yellow floor-length Calvin Klein dress, which left its mark on the cultural lexicon due to the casual flip-flops she paired with ballgown.

Nyong’o, who has appeared in an ad campaign for the brand’s Women fragrance, has routinely worn Calvin Klein dresses on the red carpet. Most notably, the actress wore a custom white Calvin Klein dress decorated with 6,000 pearls to the Academy Awards in 2015. While the dress got Nyong’o on many best dressed lists, it also made different headlines because the dress was briefly stolen from the actress’ hotel room — and mysteriously returned a few days later — after she wore it to the Oscars.

After announcing his departure from the brand in December, Simons designed one of his last custom Calvin Klein looks for Lady Gaga, who wore a loose-fitting, light pink gown to the Critics’ Choice Awards in January.

While we won’t be seeing the designer on the red carpet anymore, click through the above gallery for some of Calvin Klein’s most memorable red carpet looks.

The Future of Calvin Klein Without Raf Simons

WATCH: NYFW: Where Did All the Celebrities Go?