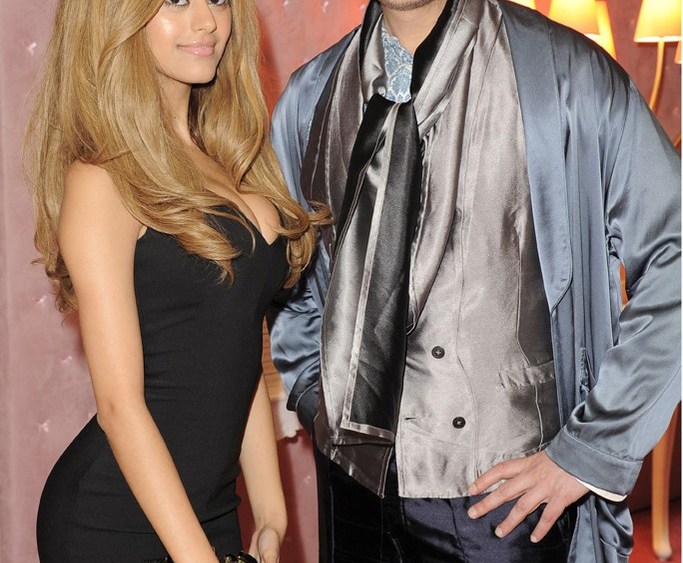 SUGAR RUSH: “This would probably give someone who’s diabetic a serious insulin reaction,” Cameron Silver joked Thursday night as her surveyed mounds of cakes and macaroons dotted among glass bells displaying everything from mules decorated with fake icing, to G-strings embroidered with candy sprinkle-shaped sequins.

The occasion was his partnership with French tabloid sensation Zahia Dehar, whose lingerie collection he will be launching at his Los Angeles boutique Decades next fall.

The event was held at Dehar’s pop-up boutique and tea room at the L’Eclaireur store on Rue Boissy d’Anglas, a pink boudoir-style space that sells her debut ready-to-wear line and accessories, which are made in France, alongside pastries specially created by Sébastien Gaudard.

A push-up bra, embellished with organza frills resembling a cupcake case, retails for 350 euros, or $455 at current exchange, with the matching G-string going for 300 euros, or $390.

Dehar arrived beyond fashionably late, her Barbie-like curves poured into a little black dress. Asked how she maintained her 19-inch waist, Dehar shrugged. “I’ve never done anything. I do a little sport,” she said, before sitting down at one of the tables and tucking into a cupcake with pink icing.

Gaudard said “Mademoiselle” — as he calls her — was closely involved in developing the sweet treats. “We had quite a lot in common, as she is defending French craftsmanship, and I am defending the same cause on the gastronomic side,” said the pastry chef, who has previously worked with Chantal Thomass and Vanessa Bruno.

Rose McGowan could not resist picturing a disturbance in the saccharine space. “I would love it if somebody would go Jackson Pollock on the walls. How about that? Just like come in and just do some crazy performance art, throw paint around. That would be amazing,” she joked.

The “Charmed” star explained that she had just directed her first short film, “Dawn,” which is all about challenging societal attitudes to women. “I wanted to explore girl politics in the early Sixties. It’s set in this pastel world and then things….get slightly dark,” McGowan said.

The actress is now preparing to direct her first feature film.