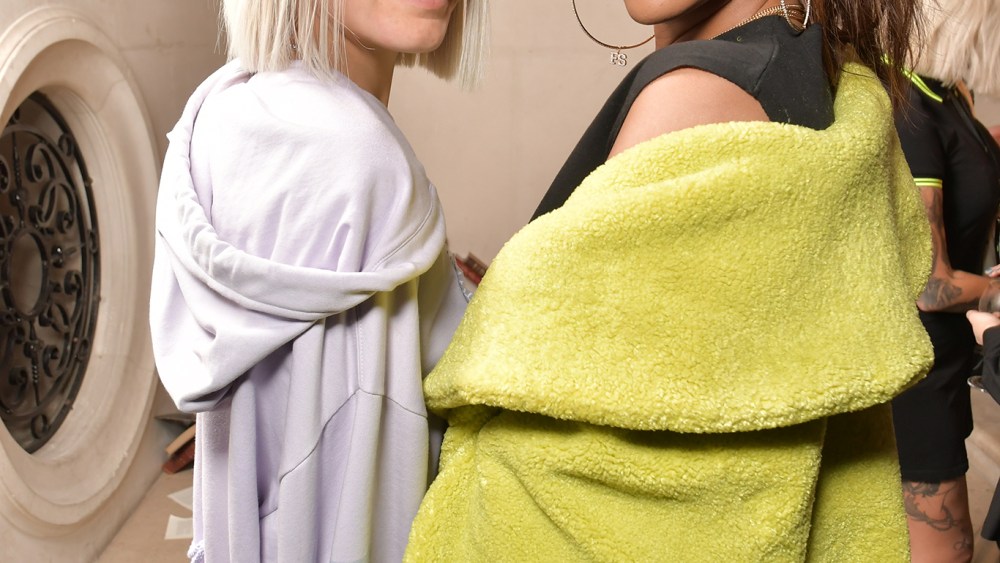 DETENTION SQUAD: Rihanna’s not the only bad gal in town. At the singer’s detention-themed runway show for her Fenty Puma collection, held at the Bibliothèque Nationale de France, Cara Delevingne played the class clown.

“Is that a real book?” she asked her neighbors, Nick and Joe Jonas, thumping her fists on one of the long library tables that doubled as the catwalk. Her hair newly chopped into a striking platinum bob, half hidden under a gray hoodie, she posed next to Salma Hayek as François-Henri Pinault, the chairman and chief executive officer of Puma parent company Kering, snapped the action.

Delevingne appears in the German sporting goods maker’s “Do You” campaign. Meanwhile, M. Pokora, who was also sporting bleached hair, stars in a clip promoting the Ignite Limitless shoe. “I’m on tour since last week,” said the French singer, who is set to play 70 dates between now and the end of the year.

Rihanna had also handed out a detention card, which doubled as a show invitation, to film director Luc Besson. The Barbadian singer will appear alongside Delevingne in his upcoming sci-fi movie “Valerian and the City of a Thousand Planets.”

In the center of the room, French model Noemie Lenoir was being introduced to the rapper Future. “Hello, I’m the past,” she said with a smirk. “No, you’re the present,” replied Future, who had probably heard the line before.

“When I was at university, I used to study at this time,” mused Sita Abellan. The model, DJ and designer, who studied advertising and p.r., walked in the Fenty show last season and was decked out in a full look from the Marie Antoinette-inspired spring collection.

Chiara Ferragni, aka The Blonde Salad, said it had been a while since she set foot in a library after dark. “This place is magical,” she enthused. “I don’t know, it makes me feel like I’m in a Harry Potter movie.”

The feeling probably dispelled once the models emerged and Hanne Gaby Odiele started tearing the pages out of a book. This was Fenty School, after all.