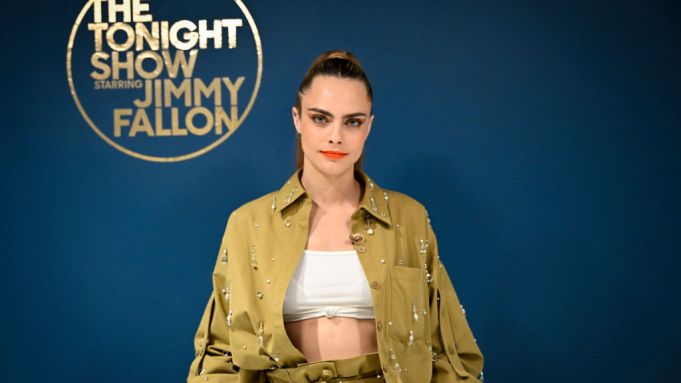 Cara Delevingne went with a casual, yet chic look for her latest appearance on “The Tonight Show Starring Jimmy Fallon.”

The model and actress appeared on the late night show Wednesday night wearing a loose-fitting earthy-green dress shirt and trousers embellished with crystal detailing from Phillip Lim. Her look was styled by styling duo Rob Zangardi and Mariel Haenn.

Delevingne spoke about her recent role in the second season of Hulu’s hit comedy, “Only Murders in the Building,” which also stars Selena Gomez, Martin Short and Steve Martin.

“Well the weird thing was, I just finished a show. I finished ‘Carnival Row’ and I was like, ‘I think I need a break for a little bit, because I’d done this show for like coming up to four years and eight months,’” Delevingne explained. “And I don’t know, my agent called me up and said, ‘So they’ve asked you to be in this show’ and I was like, ‘Oh she’s probably joking,’ because I hadn’t met the director or anything. They were just like, ‘They want you to be in it,’ and I was like, if this is a joke I’m going to be so angry, but if it isn’t I’ll pay, and she was like, ‘You shouldn’t say that to people.’ And they were like, ‘You play a queer, English wannabe artist,’ and I was like ‘OK, that sounds odd. Never done that before.’”

While Delevingne has made a name for herself in the acting world, starring in films like “Suicide Squad,” “Paper Towns” and “Valerian and the City of a Thousand Planets,” she still takes on various modeling jobs. Most recently, Delevingne was the face of Seven For All Mankind’s spring campaign and was the face of Dior’s Joaillerie collections.

As one of the late Karl Lagerfeld’s many muses, Delevingne also collaborated with the designer’s namesake label to co-create a fashion collection that is slated to debut this September.