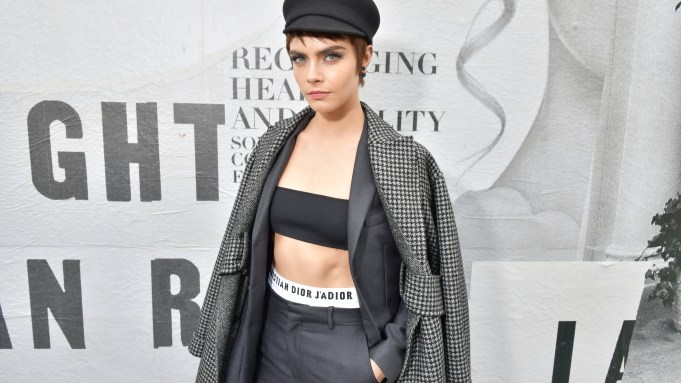 WOMEN’S DAY: “Celebrating the feminine,” Cara Delevingne yelled as she took in the decor of the Dior show on Tuesday: the walls, floor and benches a collage of women’s magazines from 1968. The feisty model and actress had accessorized her gray suit with a black logo bra and cap from the show.

“I’m completely blown away by the visuals, it’s such a powerful message. It’s a celebration of the Sixties and the Seventies, the revolution — and we are in a revolution now. It’s female empowerment, female togetherness,” added Delevingne who is currently filming the new Amazon TV fantasy series “Carnival Row” in Prague, opposite Orlando Bloom, in which she plays “a fairy warrior.”

Ellen von Unwerth, who’ll be launching her magazine, Von, this weekend in Paris, said the first issue — “the Fight issue” — was inspired by the female boxers at the Overthrow boxing club on Bleecker Street in New York.

Selah Marley, who wowed the crowd with her look, combining a checkerboard jumpsuit, Space Age mirrored specs and a jutting ponytail, demurred on projects, but hinted they are multidisciplinary with an array of creative fields. She was forthcoming on her appreciation of the show, though. “So many patterns! I recorded the whole thing. I love how [Maria Grazia Chiuri] played with prints, with the mix of clothes…Dope, dope patterns but also how she made variations on that,” said the singer. “It’s definitely female empowerment. The looks are bold, it’s woman stepping into their power, their glory. It’s unapologetic.”

Her shades clamped on, Bianca Jagger said she’ll be participating in a women’s march next month. “I always call for a non-violent revolution, as this one is,” said the activist. “And I feel that this time, at last, we have been heard.”