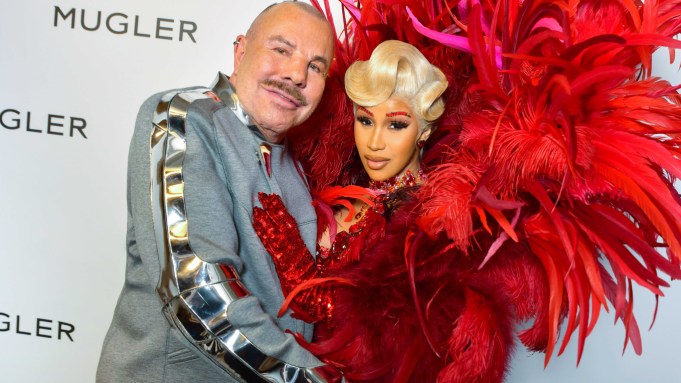 PAINT THE TOWN RED: Cardi B attended the opening of the “Thierry Mugler: Couturissime” exhibition at the Musée des Arts Décoratifs in a dramatic red ensemble from the designer’s 1995 couture collection.

The singer stunned in a skintight, sculpted gown topped with an enormous feather cape and hood from Mugler’s legendary Cirque d’Hiver show, adding sequined opera gloves and an intricate ruby choker. Even her brows were made up to match, covered in red glitter.

She posed at the entrance, before being whisked to the second floor of the museum to hang with Mugler, who now goes by his birth name Manfred. There, Cardi B changed into a second dramatic outfit, once again mining the archives for a waist-cinching black gown from his 1997 insect-inspired couture collection.

The pair descended the steps to cheers and whoops from the crowd, passed through the grand hall that had been turned into an impromptu dance floor playing ‘80s French pop, before taking in the exhibit privately. It was the Grammy winner’s first red carpet appearance since giving birth to her second child three weeks ago.

Cardi B has been digging deep into the Mugler closet since the 2019 Grammy Awards, when she pulled from the same couture collections for three looks on the red carpet and on stage.

They were joined by Sandrine Groslier, global brand president Mugler fashion and fragrances, and Casey Cadwallader, who was named artistic director of women’s ready-to-wear at the house in 2017.

LaQuan Smith Is in An Empire State of Mind