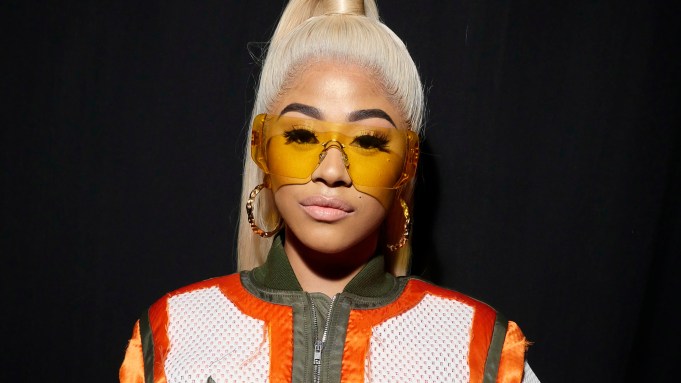 As anyone who’s attended a show or party at New York Fashion Week knows, there’s a lot of waiting around involved; waiting for the lights to go down, for the music to swell, the runway to begin, or, in the case of Jeremy Scott’s Friday night presentation, for a VIP arrival.

Cardi B’s sister Hennessy Carolina was the last in a line of front-row guests to show up, leaving the p.r. unraveling in a scheduling fever.

“She’s not here yet?!” one employee hissed into the microphone attached to her headset. She held it so close to her mouth she might have swallowed it. “I’m not holding the show!”

The rest of the front row — Courtney Love, Aquaria, Maluma and his girlfriend Natalia Barulich among them — said hi to one another and sat patiently, hanging out.

“Look at all these kids,” Love said admiringly. She’d taken in the Tom Ford show a few days before, and planned to attend dress designer Batsheva Hay’s presentation on Tuesday. She’s collaborating with Hay and her former bandmate, the Hole bassist Melissa Auf der Maur, on “something special.” (Love said she hadn’t read the article on The Cut about how terrible prairie dresses are, but when asked about it, merely replied, “What’d it say? Wow. God, that’s terrible.”)

Maluma, holding a cane, sat close to Barulich. The public has a near-obsession about the relationship between the reggaeton artist and his partner. So what’s one thing he’d like fans to know about their union, for the record? “That we love each other, that we support each other, that we love being together but always respect each other’s space — I think that’s really important,” he said.

Sitting next to him: Rich the Kid, who wore Uggs; Yung Miami, one-half of the rap duo City Girls; Bria Vinaite, and Coco Rocha.

Once 8:30 p.m. rolled around, the guest in question took her seat: Hennessy Carolina was here. In her latest Harper’s Bazaar cover story, Cardi discussed postpartum depression after giving birth to her daughter Kulture, and how she coped. During that time, Hennessy Carolina said she assisted by simply being there for her sister. “I just was the best aunt and the best sister that I could be,” she added. Her plans for NYFW are “to go to as many shows as I can,” she said, punctuating her comment with a laugh.