The second edition of CR Runway, streaming May 1, will raise support for the amfAR Fund to Fight COVID-19.

Carine Roitfeld’s inaugural CR Runway show, cofounded by Vladimir Restoin Roitfeld, kicked off last June with an extravaganza outside Florence. The show celebrated Luisaviaroma’s 20th anniversary and featured couture wedding gowns from the House of Christian Lacroix, among other vintage fashions, a performance by Lenny Kravitz, and appearances by the industry’s biggest models of recent decades.

A hard act to follow, but the second CR Runway event, in collaboration with amfAR, is poised to one-up all of that in support of amfAR’s Fund to Fight COVID-19.While the show setting for “CR Runway with amfAR Against COVID-19: Fashion Unites” is decidedly less glam — it’ll stream digitally on YouTube, with choose-your-own seating assignments at home — the cast of characters slated to appear rivals that of any other major amfAR event. Derek Blasberg, head of fashion and beauty partnerships at YouTube, will host.

“We launched CR Runway last June with the mission of using fashion and self-expression as driving forces in the creation of positive change for our global community,” said Vladimir Restoin Roitfeld. “Combining fashion, music, creativity, and simple fun, we hope to spark joy and hope for all those watching across the world, while supporting amfAR’s incredible researchers and health-care workers who are working tirelessly to ensure the safety of us all on the frontlines.”

“I had such a fun time getting to do my job, which I haven’t gotten to do in almost two months now. It’s really nice to get back in to it to be able to help this important cause,” said model Cara Taylor.

Models walking in the show will be wearing designs from their own wardrobes, styled remotely by Roitfeld.

“Collaboration is very much a part of my creative process, with every single person I interact with inspiring me in new and exciting ways every day. During this period of isolation, I felt the desire to engage with the creativity of others more than ever,” said Carine Roitfeld. “I am very proud of how much we all stepped out of our comfort zones to create this event. For the first time, hairstylists brought their visions to life without the use of their hands, models called the shots from behind the camera, and I learned how to style looks using only what I could see through a video call on my phone.”

On the production side, all done pro bono, Fabien Constant will direct and Michel Gaubert is in charge of music supervision, while Sam McKnight and Tom Pecheux will provide hair and makeup direction for each model.

“I think Tom Pecheux, the love of my life, will be very satisfied with my one-minute smokey eye look,” said model Eva Herzigova, who also had another message of gratitude to pass along. “Thank you to our heroes, the men and women in the frontline, the health-care workers and medical researchers continuing to fight for us.” 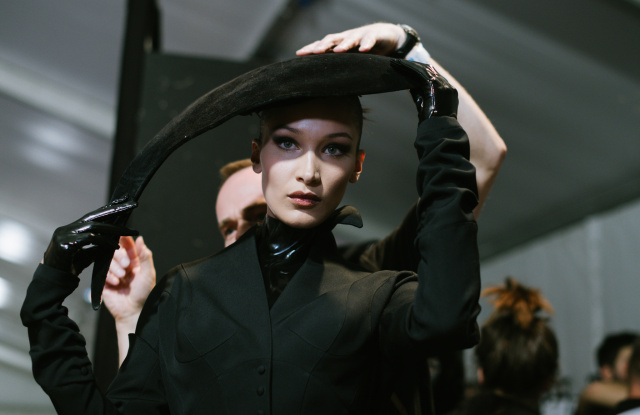 A24 Auctioning Off Props and Costumes for a Cause