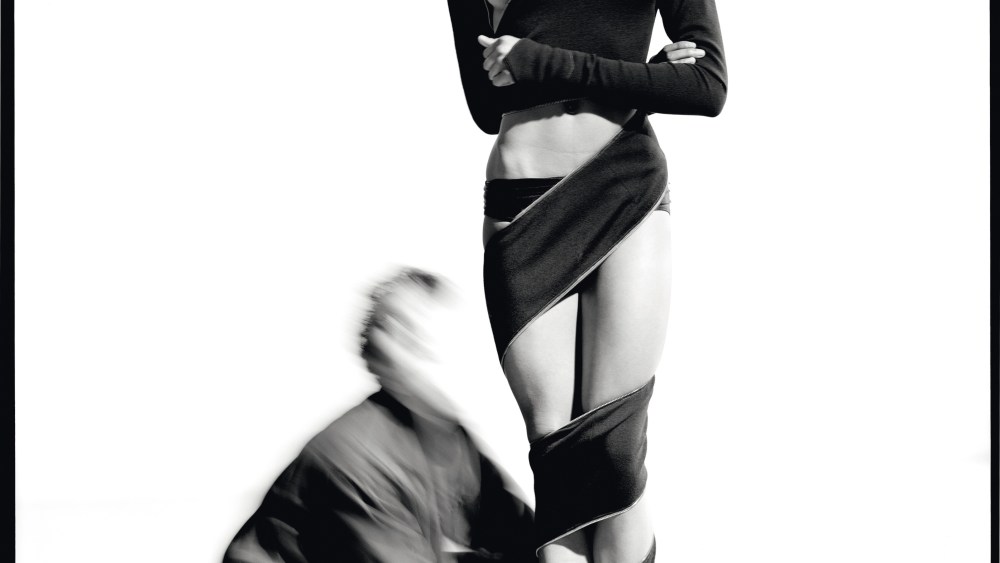 CARLA SOZZANI’S ABCs: “Between Art & Fashion: Photographs From the Collection of Carla Sozzani” offers more than a captivating and very personal view of a century of photography.

The exhibit, which opened at Berlin’s Helmut Newton Foundation last Friday, is also a striking and often surprising testimony to the visual power of the alphabet. The show’s more than 200 works by 89 photographers (out of Sozzani’s trove of about 2,000 prints) have been displayed in alphabetical order. This results in countless “a-ha” moments, as in the shoulder-to-shoulder meeting of Karl Blossfeldt’s lithe plant forms and Cecil Beaton’s lilies of society, or the equally poignant power of distortion and clarity as in Arthur Elgort’s blurred-face portrait of Azzedine Alaïa kneeling before a bound Naomi Campbell compared with Walker Evans’ graphic dry cleaning sign.

Normally surrounded by photographs hung from floor to ceiling on the walls of her spacious office at 10 Corso Como in Milan, and having hosted hundreds of photo exhibits since opening her gallery there 28 years ago, Sozzani still doesn’t consider her accumulated images a collection. She sees them as “memories of over 50 years in fashion,” during which she worked and was friends with a who’s-who of talent, including Alaïa who instigated and first hosted an exhibit of Sozzani’s collection in Paris. Alaïa, in turn, brought in Fabrice Hergott, director of The Museum of Modern Art in Paris to organize and (with Sozzani) edit the scattered images. It was Hergott who hit on the alphabetical plan.

“The alphabet belongs to one of the best things in the world,” Hergott exclaimed to WWD. But it was the thoroughgoing quality of Sozzani’s assembled images, he emphasized, that made the alphabetical organization workable for a photographic lineup that goes in so many different directions. About 33 percent larger than the original Paris and a later Swiss show, the Berlin presentation has been expanded to include Sozzani’s projects and collaborations with Helmut Newton, Bruce Weber, Sarah Moon and Paolo Roversi and includes work photos, contact sheets, invitations, leporellos and even short films in addition to the original prints. Moon and Roversi, like Hergott, joined Sozzani in Berlin for the press conference and opening. “Between Art & fashion” runs until Nov. 18.

For the Helmut Newton Foundation, which as a rule exhibits a dialogue of three photographers’ visions at one time, “Between Art & Fashion” was also an experiment not only in its ABC format but in the multiplicity of photographers involved. “It’s like a school of seeing,” commented the museum’s director Matthias Harder, and indeed, it was this aspect of the project that won Sozzani’s instant approval.

“For me, it’s about sharing, and it’s particularly nice to share with the younger generation. For someone young interested in photography, the possibility to see 89 kinds of eyes in one place is why I immediately said yes,” she told WWD.

The first photo Sozzani ever bought, in 1974, was a portrait of a New Guinea warrior by Irving Penn, which normally hangs in her home but can now be found under “P” in Berlin. “It appealed so much to me then, and still does,” she recalled. Her latest acquisition is by Viviane Sassen, also represented in the Berlin show, of whom Sozzani commented “She’s a very good Dutch artist who travels to Africa a lot and who I find takes a spiritual approach.”

Most of Sozzani’s chosen works are in black and white, which she suggested allows “more space for fantasy and dreams. Some pictures are actually better in color, but black and white is more serene and more intimate.”
Today’s “everyone’s a photographer” smart phone culture and resulting imagery overload doesn’t faze Sozzani. ”It brings out peoples’ artistic side and I think it’s positive for people to feel free to express themselves. Often the results are no good, but it doesn’t matter.”

However, what is “good about photography is that it’s so easy to do,” she argued. “Only fashion photography has become so complicated with all these big productions. I remember when it was just us and an umbrella.”