The illustrator whose fans include Sarah Jessica Parker, Mark Ruffalo, Rachel Zoe and Jeremy Scott is broadening her reach beyond Instagram and fashion. 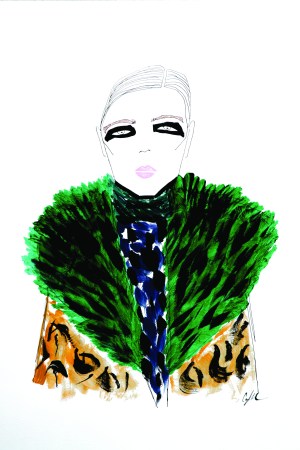 Carly Kuhn gave visitors to the Beverly Hills beauty destination Striiike — where co-owners and sisters Jenn, Kristie and Ashley Streicher have hung up her drawings — a surprise Thursday by sketching them as they were prettied. The lighthearted portraiture session kicked off the illustrator’s web site cartorialist.com, housing her prints and profiles of creative people, and a series titled “The City as a Canvas” in which she explores cultural venues and spaces in Los Angeles.

Kuhn, whose fashion clients have included Prada, Dior and Alexis Bittar, ventured into art as a side project while working as a producer on the E! Entertainment Television Network’s show “Chelsea Lately.” Her pieces gained a following on Instagram, where a Parker repost gave Kuhn a career jolt, and she left television a year ago to focus on them full-time.

“When I started out, I just would draw every day. I became confident at the perfectly imperfect. It’s not capturing the runway necessarily, but maybe a backstage scene,” said Kuhn. Now she’s hoping to expand her horizons beyond fashion and Instagram. “I like fashion and clothes, but I’m not necessarily a fashion girl,” she reasoned.

Kuhn recently decorated the wall of the restaurant Sawyer in L.A.’s Silver Lake neighborhood with a floral mural and is considering becoming artist-in-residence at the upcoming downtown retail, residential and office complex Row DTLA. “I didn’t go to art school. This kind of happened by accident, so I’m open to everything. I don’t necessarily play in the quote-unquote art world,” said Kuhn. “I’m not doing the traditional thing of getting into a gallery. I’m more about getting into people’s homes and in places like restaurants or a beauty studio.”