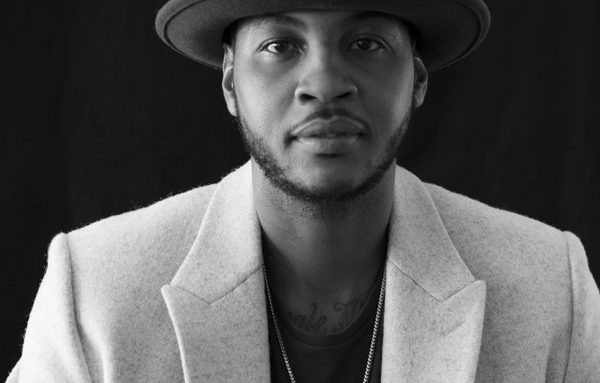 The NBA All Star partnered with The Brooklyn Circus, Ghetto Gastro, Barriers Worldwide, Demestik, Diem, Shakira Jovanni and Tier to produce pieces that exemplify their vision of the future for Black people and what it means to them.

Anthony said he had worked previously with the designers. He sees this collection as a way to give support and resources for emerging and established designers and entrepreneurs.

“It’s challenging to put everything together, but that’s why we have teams,” Anthony said about working on the project. “But for the ultimate message and what we’re creating, it’s not a one-time thing. It’s a program that’ll happen throughout the year. I want it to redefine what the creative space is in our cultural landscape. Next year might be different.”

Brooklyn Circus creative director Ouigi Theodore designed a hoodie with the number 2,193,178 on the front, which is the prison population in the U.S., and a back graphic of hands breaking chains, and the Tiers of Joy hoodie by Tier led by Brooklyn natives Nigeria Ealey, Esaie Jean-Simon and Victor James shows an eye crying tears, reflecting moments to be proud of.

Shakira Jackson, founder and designer of Shakira Jovanni, designed a “Passing the Torce” long-sleeved T-shirt with an illustration of a young person holding a torch on the front and the words “established,” “resilient,” “hopeful,” “triumphant” and “enlightened” on the back. Bronx natives Jon Gray, Pierre Serrao and Lester Walker of Ghetto Gastro calls for revolution in their Revolt Now T-shirt, Michael Nicholas of Diem and Reuben Reuel of Demestik imagine tranquility and peace, and Steven Barter’s Barriers Worldwide rounds out the collection with a graphic for unity.

Each piece made its debut in a 3-D digital show, and is available for preorder ranging in price from $140 to $350.

Last year Anthony unveiled his second Melo Made collection inspired by South Africa and with brands such as Rag & Bone, Rochambeau, Goorin Bros., Famous Nobodys and Jordan Brand. This year is much different due to the pandemic, but Anthony said he had to adapt and is about using his platform to help others in fashion.

When asked about his idea of a Black future, Anthony said, “We’ve always adapted to our environment and the things going on. We deal with trauma every single day, but even though there is trauma, what about the young Black creative minds who are being overshadowed and don’t have a voice? Those are the ones we need. That’s where my mind is at, how do we challenge the norm?”