Carmen Marc Valvo is the latest designer to be headlining a QVC show. 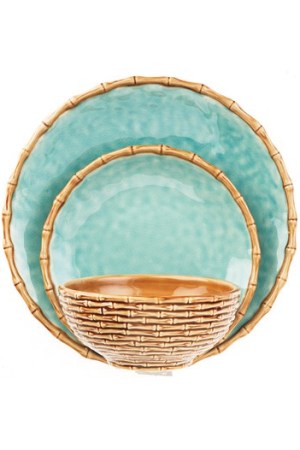 FASHION PLATES: Carmen Marc Valvo is the latest designer to be headlining a QVC show. But he won’t be hawking one-size-fits-all tops or costume jewelry. The designer has developed Carmen Marc Valvo Home, tableware, serving pieces and decorative items exclusively for QVC. Entering the category is a first for Valvo, who said he entertains frequently in the Hamptons and “really gets obsessive about the food, flowers and matching the napkins to the plates.”

During his April 18 broadcast, he’ll be selling flower-shaped plates, space-saving stackable vases, cottonwood nesting bowls and beaded mosaic pillows, among other items. Somehow selling clothing on QVC didn’t make sense for Valvo, who is known for formfitting, high-end dresses. “What am I supposed to do 1X, 2X, 3X eveningwear?”

COAT OF ARMS: The endless dissection of Michelle Obama’s style is showing no signs of waning. In fact, The Running Center is taking the copy-her-look concept to a whole new level with the debut of M.O.D.A. classes — which stands for Michelle Obama Defined Arms. The hour-long $20 class is geared — you guessed it — toward attaining buff biceps. Owner and head coach Mindy Solkin said she dreamed up the idea after people praised her well-toned triceps with, “You’ve got Michelle Obama arms.”

DVF HITS THE BEACH: Diane von Furstenberg will get her feet wet in the Hamptons this summer. The designer has put up a sign at 53 Jobs Lane in Southampton trumpeting the opening of a 1,300-square-foot signature store, her first in the Hamptons. It’s scheduled to launch May 1. While Elie Tahari, Saks Fifth Avenue, Ralph Lauren, Scoop and Intermix have put up permanent designer stores in the Hamptons, DVF is taking it slow. “It’s a short-term lease with an option to extend,” said a real estate source. The store will be housed in a new building that’s like “a clear vanilla box with low installation costs,” the source said. DVF has 26 freestanding boutiques around the world.

HARRODS LOOKS EAST: Harrods might be synonymous with a trip to London, but now followers of the famous department store can get a taste of its wares even if they’re far from the U.K. On Saturday, Harrods will unveil a 4,000-square-foot store in the Suria KLCC shopping complex in Kuala Lumpur, Malaysia. The Harrods World Signature Shop and Tea Salon will carry Harrods merchandise, such as its green and gold shopping bags and teddy bears, along with coffees, teas and biscuits from the store’s line of luxury foods.

The space will also house a tea salon, whose decor has been inspired by the Georgian Restaurant in Harrods’ Knightsbridge store, with framed pieces of Harrods memorabilia on the walls. “The move into Malaysia is an important one for Harrods, and I am delighted to be able to offer customers the unique mixture of luxury merchandise and exemplary service which epitomizes the Harrods experience,” said chairman Mohamed Al Fayed.

The Kuala Lumpur store, which Harrods has opened in partnership with Tradewinds Corp., comes in addition to Harrods’ two stores in Kuala Lumpur International Airport. Harrods also has small stores and concessions in countries such as Japan, Taiwan and Singapore.

CHILD’S PLAY: Paris fashion hub Colette is targeting tots for its next ephemeral shop-in-shop project, situated on its second floor. For one month starting May 1, a variety of mainly limited edition children’s goodies will go on sale in the space, from candy to clothing.

SNOW BUSINESS: Europe’s snow-capped hills are alive for Tommy Hilfiger. For next winter, Hilfiger Ski has produced a capsule collection of luxury ski gear in partnership with “Best of the Alps,” a branded network of 12 of Europe’s most prestigious alpine resorts. Member sites include Cortina d’Ampezzo in Italy; Chamonix Mont-Blanc and Megève in France, and St. Moritz in Switzerland. The men’s and women’s clothing line will be distributed in selected stores in Europe, including several Best of the Alps locations, and consists of slim-line women’s ski pants, V-neck sweaters and jackets made from weatherproof techno fabrics.

A TOAST TO SPRING: Brian Reyes, characteristically casual in denim, a checked button-down and sneakers, sipped Champagne and admitted that he “never know[s] who to talk to at these things,” during a private reception last week at the W Hotel in Atlanta’s Buckhead district. Reyes was in town — with his rock-quarry-inspired fall 2009 ready-to-wear collection in tow — to mingle with customers from Addiction, the only Atlanta specialty store that carries the line.

Speaking of his fall collection, which is less colorful than past showings, Reyes said, “Every designer prefers either fall or spring. For me, it’s spring. Spring fabrics and colors just make more sense to me.”

FIT FOR A QUEEN: Queen Elizabeth II’s far-flung travels — and the sartorial choices she’s made on those trips — will take center stage at a Buckingham Palace exhibition this summer. “Queen & Commonwealth: The Royal Tour,” will display 27 dresses worn by Queen Elizabeth over her past six decades of travel to the Commonwealth nations. The exhibition will number creations by royal couturiers, including Norman Hartnell, Hardy Amies and Ian Thomas, alongside more exotic attire, such as a pair of traditional Maori feathered cloaks given to Queen Elizabeth and Prince Philip on their 1952 tour of New Zealand. Highlights of the show include an ivory and emerald green duchesse satin gown worn by Queen Elizabeth at a 1961 state dinner in Lahore, Pakistan, and a lemon yellow fine wool crepe day dress and jacket by Hartnell, which the Queen wore to Sydney’s Randwick racecourse during her 1970 tour of Australia. The exhibition — which marks the 60th anniversary of The Commonwealth of Nations, an association of 53 independent sovereign states of which Queen Elizabeth is the ceremonial head — will also display a selection of gifts presented to the royal couple during their visits. The exhibition runs from July 26 through to September 30 during the summer opening of Buckingham Palace’s State Rooms.

PAPER CHASE: Thirty years worth of Angelo Tarlazzi’s fashion sketches and drawings are going on display at the Galerie Hopilliart Leroux on Paris’ Left Bank from June 5. Tarlazzi, who has also designed for Jean Patou and Guy Laroche, is well known for his signature “handkerchief” dresses, made of silk squares, and knitwear, such as sweater dresses.

CASUAL DAYS: Maria Luisa Poumaillou, independent retailer and newly appointed fashion editor of the Printemps department store in Paris, has added another feather to her cap: designer. Poumaillou has whipped up a fall capsule collection of jersey and knitwear pieces, retailing from 105 euros, or $140 at current exchange, for a jersey top to 465 euros, or $620 at current exchange, for a long knitted cardigan. Other elements of the line, described by Luisa as “comfortable but not casual or sloppy,” include pencil skirts, tube dresses and tailored coats, in a palette of blacks, grays and blues. The collection will be distributed in Maria Luisa stores and on the Yoox.com fashion e-commerce site.