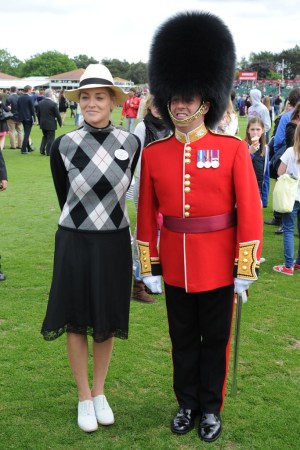 As the sun finally burst through the clouds on a day blighted by rainfall, thoughts turned to Prince Philip, who usually attends the event but who spent the past two weeks in the hospital for an abdominal complaint. “We send him our best wishes for a speedy recovery,” said the announcer over the public address system before the match, which saw Zacara beat El Remanso 15 to 9.

“‘Games of Thrones’ plus social media is an amazing combination,” she said. “I think I got something like 6,000 mentions on Twitter after one particularly gruesome episode. It’s true that no one is safe on that show — anyone can die at any time — which certainly keeps people on the edge.”

Author Jilly Cooper, meanwhile, dispensed tips on dressing for a polo match: “It’s very tricky….You’ve got the weather to think about, then shoes, of course. High heels can be a mistake, because you’re trying to walk around and sinking into the ground,” she said, demonstrating the fatal walk — much to everyone’s entertainment.