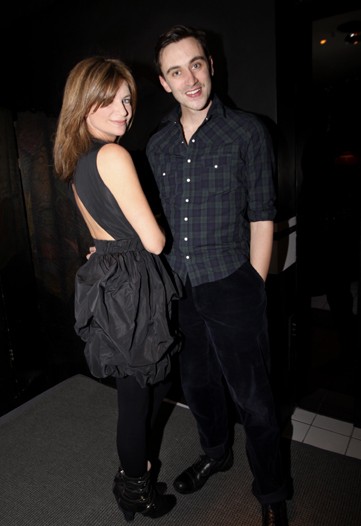 CARVEN’S CREW: “A young Yves Saint Laurent” isn’t a bad moniker for an emerging designer, especially when it’s bestowed by Net-a-porter founder Natalie Massenet. The designer in question was Guillaume Henry, who’s behind the newly revived Paris label Carven, and Massenet threw a dinner Tuesday at Blakes in London to extol Henry’s talents to a clutch of London editors, private clients and bloggers. Massenet, who was wearing a black puffball dress from Carven’s spring collection, regaled the room with how she’d stumbled across Henry’s collection during the spring 2010 Paris shows, after getting a text tipping her off to the designer. “We were running around the showroom saying, ‘What about this? And this?’” she said of Henry’s line. Henry, an alum of Givenchy and Paule Ka, said his vision for the label is “dresses, dresses, dresses.” But it wasn’t all work and no play on his whistle-stop trip to London. “I saw Dover Street Market and went to Richard James — for myself. I wanted to get his socks in all the crazy different colors,” he said.

HELLO, SAILOR: Having designed the main sail for a boat that aims to set the record for this month’s New York-Barcelona crossing, Custo Barcelona’s Custo Dalmau celebrated by welcoming some of its sailors and fans to his Spring Street store in New York Wednesday. “We understand that life is an adventure, and what these people proposed to us was to decorate their adventure,” he said. For the Estrella Damm-sponsored vessel, the designer opted for a mostly red creation with orange, yellow and green as accents, since the ocean is sometimes “not very colorful,” Dalmau said. Don’t look for him on the high seas, though. “I like surfing, but I am terrible in sailboats. But in this business, we are swimming to survive every day,” he said.

DISPLAY CASE: Matthew Williamson teamed up with “Gossip Girl” designer Eric Daman to create window displays at the designer’s Meatpacking District store inspired by an April 5 episode of the CW soap. The episode will feature main character Blair Waldorf (played by Leighton Meester) shopping at the boutique and wearing one of her purchases — a silk halter dress from his spring collection — in a later scene. Accordingly, the windows feature a Waldorf-esque brunette mannequin clad in the same Williamson dress alongside foreshadowing signs that read “What Did Chuck Do?” and “Tune In.”

For Daman, Williamson’s dress played perfectly into the episode’s story line. “I wanted it to represent innocence, purity, vulnerability — characteristics that are not usually explored with Blair’s character,” he said. “So the creamy draped chiffon was…[the] perfect incarnation to give a nod to Blair à la Joan of Arc or Fay Wray.”

HERE COMES CARMEN: Carmen Marc Valvo is the latest designer to jump into the bridal business. He has
signed a licensing deal with Designer Bride Inc. to launch a collection of wedding dresses.