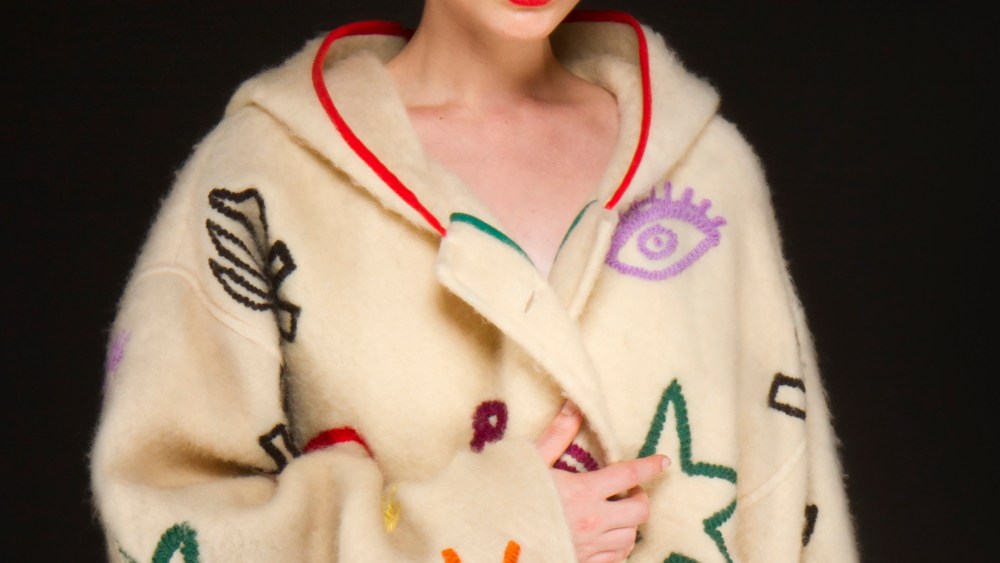 ONE-OFF FINDS: Coinciding with the 40th anniversary of his fashion house, de Castelbajac is to sell 50 pieces from its archives on Videdressing.com, the French web site of pre-owned fashion. They include a wool sweater with a giraffe motif from the spring 1981 collection (Roxanne Lowitt lensed Inès de la Fressange in it, with Jerry Hall kissing the giraffe); a long dress with orange wild silk and American armhole hand-painted by the designer from the spring 1998 show, and a beige wool coat with multicolor patterns, red interior and hood from fall 1988. They are priced 350, 2,500 and 5,000 euros respectively, or $393, $2,809 and $5,619 at current exchange rates.

“The funds of the sale are meant to participate to the restoration and maintenance of the rest of our archives,” said the designer, noting they consist of about 7,000 pieces that are kept outside Paris. (The house has kept other models of the 50 pieces that will go for sale). “The goal is ultimately to have a team for our fund and the dream is to create a foundation, which could in turn help young designers,” he said.

In addition, de Castelbajac created exclusively for the tie-up with the online player a silk scarf festooned with words including “Fashion Together” in a limited edition of 100 pieces, priced at 69 euros, or $77. All pieces are slated to launch on Sept. 5 on Videdressing.com. It marks a first collaboration with a designer for the online platform that was founded in 2009.

As reported, the designer is to release a book “Jean-Charles de Castelbajac, Fashion, Art & Rock ‘n’ roll” also this fall, published by German publisher teNeues in collaboration with YellowKorner. “There’s a behind-the-scene dimension to it,”  said de Castelbajac about the book. It includes a visual featuring Andy Warhol on an advertising campaign shot by Oliviero Toscani in the Eighties for Iceberg; a photo of Katy Perry in 2009 wearing the Barack Obama dress from the “JC in the Sky with Diamonds” collection at the MTV Music Awards and a shot of Beyoncé Knowles in Lady Gaga’s “Telephone” music video. In it, Knowles is wearing a jacket and shoes from the “Pirates, Parrots and Paradise” collection from spring 2010. The tome is priced at $95.

A film produced by Franco-German television network Arte and directed by Mathieu Cesar is also in the works.