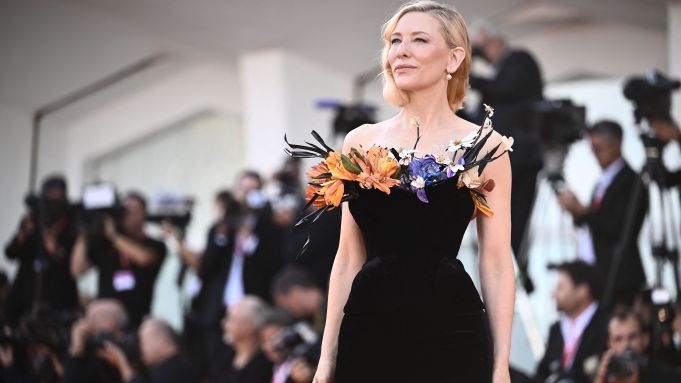 Cate Blanchett is continuing her streak of high-fashion moments at this year’s Venice Film Festival.

On Thursday, the Oscar-winning actress walked the red carpet for the premiere of her newest movie, “Tár,” wearing a look by Schiaparelli, featuring a black velvet corset embroidered with multicolored hand-painted flowers paired with low-waisted velvet pants. The outfit was from the label’s fall 2022 haute couture collection designed by its creative director, Daniel Roseberry.

She styled her blond bob down in loose waves and kept her makeup and accessories simple.

Blanchett was styled by Elizabeth Stewart, who also works with the likes of Viola Davis, Julia Roberts and Zoey Deutch.

The actress stars in the upcoming psychological drama as Lydia Tár, a renowned conductor and composer, and the first female chief conductor of a major German orchestra.

The movie, which is directed by Todd Field, also stars Nina Hoss, Noémie Merlant, Julian Glover, Sophie Kauer and Mark Strong, among others.

The world premiere of “Tár” will take place in Venice on Thursday and is scheduled for a theatrical release on Oct. 7.

The 79th edition of the festival is taking place until Sept. 10 and will debut some of the year’s most-anticipated films, such as the biographical drama on Marilyn Monroe “Blonde,” “The Whale,” “The Son” and Olivia Wilde’s anticipated thriller, “Don’t Worry Darling,” which stars Harry Styles and Florence Pugh.