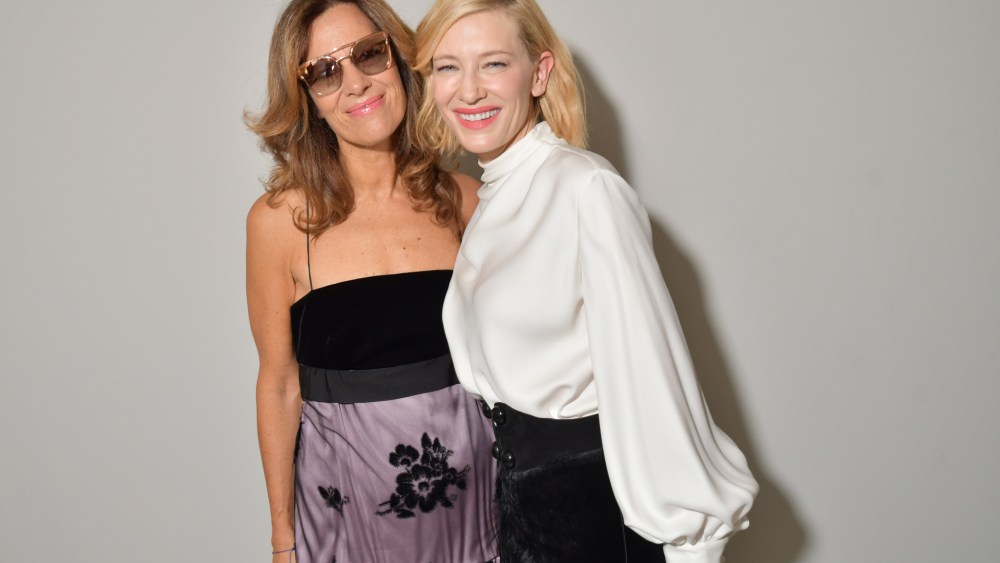 CASTING A SPELL: Cate Blanchett took a break from the promotional tour for her new film, “The House With a Clock in Its Walls,” to travel to Milan with her son Roman for a weekend of fashion-related events.

At the Giorgio Armani show on Sunday morning, the 14-year-old boy warmly hugged Roberta Armani, the niece of the designer, and practiced Italian greetings with TV presenter Jo Squillo.

“We were overdue for a mother-son weekend and it was kind of a great confluence of events, really,” said Blanchett, who the previous evening attended parties hosted by W magazine and Pomellato, and also planned to go to the Green Carpet Fashion Awards on Sunday night.

The Giorgio Armani global beauty ambassador plays a witch opposite Jack Black in her new fantasy comedy, and she welcomed the way women are reclaiming the term.

“I think it’s long had negative connotations or frightening connotations but, you know, we live in England where it’s quite a pagan country in a lot of ways, and witches were people that you went to for healing purposes, so they actually have incredibly ancient power and wisdom,” she mused.

Blanchett is gearing up to play comedian Lucille Ball in a biopic, but she hasn’t yet found her Desi Arnaz. “Aaron Sorkin is writing, and I think he’s delivering the script sometime soon, but I don’t know when, where or how,” she demurred.

“It’s about a guy who’s kind of schizophrenic, who has voices in his head, and he develops this relationship with this voice in his head, his imaginary friend,” he explained.

While Schwarzenegger had to fly straight back to Los Angeles for work, Dominic Cooper hoped to squeeze in some more sightseeing before returning to the set of his television series “Preacher,” now entering its fourth season.

“I like to queue up and try and see ‘The Last Supper,’ which I’m failing at, at the moment. But I went to the cathedral yesterday and it was absolutely stunning. I was completely mesmerized. We didn’t have time to go in, but the size, the scale of it, and the architecture and the beautiful craftsmanship of it, are incredible,” the “Mamma Mia” star said.

After the show, Cooper and other guests crossed the road to take in an exhibition of photographs by Sarah Moon at the cavernous Armani/Silos space. Featuring more than 170 images in black-and-white and color, including a series of spectacular large formats, the exhibit titled “From One Season to Another” is scheduled to run until Jan. 6.

Asked why he wanted to showcase Moon’s work, Armani responded: “Beautiful things must be seen, tout simplement.“ He noted the painterly quality of the images, and drew a link with his own aesthetic.

“I designed a collection once, without having looked at Sarah Moon, where the woman has a similar attitude, similar clothing, so it felt very beautiful to do this show that somehow reminded me of my past,” the designer said.

Moon noted she intentionally didn’t include any images from her fashion advertising campaigns. “Often I blend fashion and landscapes, or industrial images with circus photos. Everything is mixed together,” she explained, before melting into the crowd.