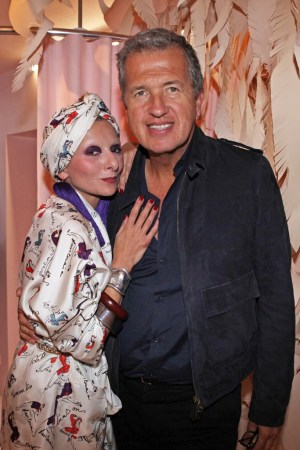 Mario Testino was among the first guests to turn up to the event Saturday night, joined by the likes of Caroline de Maigret, Johan Lindeberg, Irina Lazareanu, Elie Top and Yazbukey.

Baba, who was dressed in printed silk pajamas from the line, accessorized with a turban and purple tassel earrings, tapped Los Angeles-based illustrator Gordon Flores to design the collection’s print, based on a figurative illustration of hers surrounded by Baba catchwords: divine, darling, fantasia and, of course, j’adooor. Made in France, the pieces range from a T-shirt dress to the line’s couture entry: a made-to-measure peignoir dress with a “lot of métrage.” Prices start at around 150 euros, or $193 at current exchange, for a turban.

Violeta Sanchez, Bethany Vernon and Debra Shaw were some of the personalities modeling looks for the promotional photos.

Sipping a glass of Champagne on the pavement outside the boutique, designer Lars Nilsson said: “We’ve got the Baba jewelry [with Gripoix], and now we have the clothing line that is very her. I love the idea of being able to express a strong mood in five or six outfits. It’s energetic. As she says: ‘J’adore.’”

Yvan Mispelaere also gave the project the thumbs up, saying: “She’s very inspiring for designers, and she’s a very iconic figure of Parisian life. She really deserves all the attention. It’s a good moment for her.”

Baba said she has other design projects up her silk sleeve. “I am looking to collaborate with more divine entities and devotions — more is never enough,” she purred.