The Paris-based stylist exhibited her creations with help from furry friends. 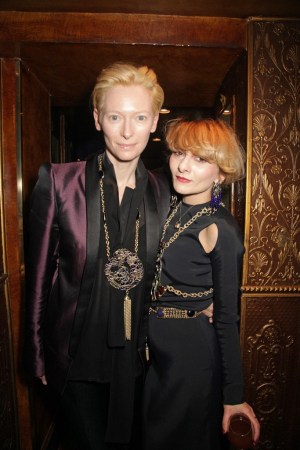 ANIMAL MAGNETISM: A menagerie of stuffed owls, peacocks and even a horned and winged baboon were recruited to model Catherine Baba’s otherworldly jewelry creations for French pâte de verre (poured-glass) jewelry house Gripoix. The colorful, neo-romantic 12-piece collection was presented on Saturday night at historic Parisian restaurant Lapérouse. “I love what you’ve done with the place,” said Tilda Swinton to Baba, referring to the bejeweled, gargoyle-like stuffed beasts that appeared to have flown in straight from the Gothic Notre Dame cathedral across the Seine. “Cometh, darlings,” said Baba, summoning her guests on a tour of the creations. These included a powder-compact ring “because one needs to powder oneself and then look at oneself,” remarked Swinton. Jefferson Hack admired a Cupid arrow-inspired brooch with a blood-red drop at the tip. Asked if he would want it for himself, Hack said Baba “already had an arrow through his heart.” Sonja Kinski, Nastassja Kinski’s daughter, was wearing some of the pieces. The sometime model plays a sultry singer in the Rudolf Buitendach-directed indie thriller “Dark Hearts” and has a role in “The Wicked Within,” by Jay Alaimo.