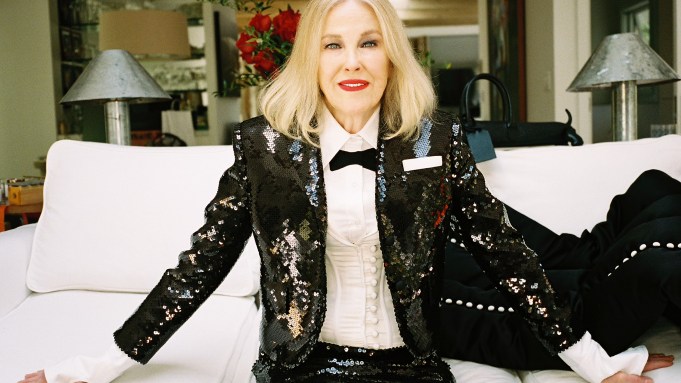 Catherine O’Hara rounded out awards season with a double win at Sunday night’s SAG Awards: the best female actor in a comedy series award for “Schitt’s Creek” and a custom Thom Browne look that gave a nod to her much beloved character on the show, Moira Rose.

“I said yes right away,” O’Hara said during a phone interview. “I think when you’re offered custom, you commit right away. That would normally scare me, but it didn’t at all with Thom Browne because I love his designs and I think he’s insanely creative.”

“She is such a truly unique individual who is so true to herself, and that is what I wanted people to see in what she was wearing,” the designer said.

The look also nodded to O’Hara’s Moira Rose character, known for her own lavish designer wardrobe consisting of black-and-white pieces. O’Hara called Browne “part of our family,” referencing how the designer dressed the show’s creator and star, Dan Levy, in a skirted wedding tuxedo for the final season.

“I kind of miss the fact that I couldn’t go to a big party and walk around and show everybody the hidden details of my Thom Browne look,” O’Hara said playfully. “I hope everyone noticed my Hector bag behind me on the couch because Thom gave me an extra long purse. I love how whimsical his designs are.”

O’Hara worked with stylist Andrew Gelwicks for the SAGs, as she has all virtual awards season. Gelwicks and O’Hara began working together prior to the 2019 Emmys, marking the first time the actress has worked with a fashion stylist.

“In a time when so many of us — myself included — are hungry for escapism, fashion and something to bring us out of our bubbles, I have been able to lean into that with her looks,” said Gelwicks.

Gelwicks and O’Hara have paid homage to Moira Rose in subtle ways throughout the awards season, including with a custom Vera Wang Golden Globes look that featured a rose print fabric, and an Elie Saab black tiered dress worn with Jacob & Co. rose-colored diamonds.

Although “Schitt’s Creek” came to an end last fall, the show is still resonating with audiences for its sharp humor, lovable characters and high-fashion wardrobe.

“Wearing those clothes makes you not just feel different, but it changes your posture and everything about yourself,” O’Hara said of the show’s costumes, which were chosen by Levy and costume designer Debra Hanson, some of them sourced from resale sites. “In a year when people in lockdown had a hard time finding a reason to not wear the same clothes every day, it was fun to see someone like Moira, who essentially is in lockdown with her family but gets up and finds a reason to look amazing.”

O’Hara herself was highly involved in her character’s development, taking inspiration from fashion icon Daphne Guinness — whose Alexander McQueen-heavy style consists of mostly black-and-white and oversize accessories. The Canadian actress also suggested to Levy that her character should have a rotating assortment of wigs.

“I suggested, or actually begged for it,” O’Hara said about her character’s wigs. “When we were all developing our characters, I said, ‘I’d like to wear a wig depending on my mood.’ It kind of scared everyone at the beginning, like ‘Wait a minute, how much work are you asking the hair department to do and how much planning is there?’ And I said, ‘No, it’s according to how she feels that day.’”

When asked why “Schitt’s Creek” has resonated so profoundly with fans, O’Hara deadpanned, “Timing is really important in comedy.”

“While the last several years have brought about and highlighted so many reasons to be afraid, along with way too much fear-mongering, our little show has brought [the audience] comfort, hope and laughs and that was our original intention. [The show] is funny and sweet and it’s written from a place of love and written about a world that Daniel Levy wants to live in and so do I.”

How 11 Golden Globes Outfits Looked Like on the Runway