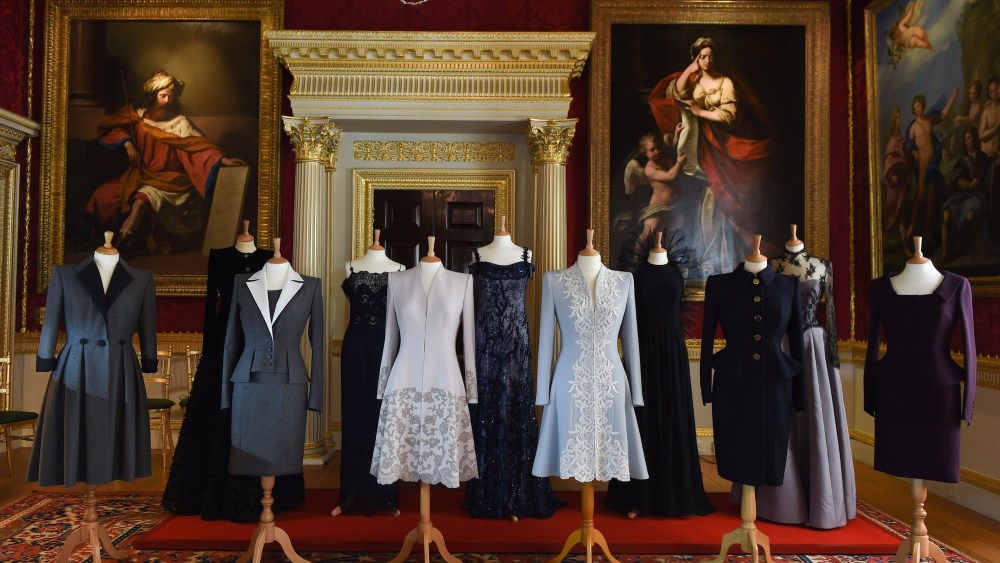 The exhibition is private and will run for three days, until Oct. 18. It takes a look at four decades of the house that was cofounded by the late Catherine Walker and her husband Said Cyrus, who is head of design.

Nine of the outfits on display were worn by the Princess of Wales, who was a Catherine Walker client for 16 years. They include some snappy pinstripe dress suits with soft shoulders; the black, halter-style gown she wore on a visit to the Palace of Versailles in 1994; and a black tuxedo suit with white collar, waistcoat and cuffs that Diana donned for a visit to Her Majesty’s Theatre Haymarket in 1993.

“We had a very easy relationship with the Princess of Wales, there was a lot of trust between us, and toward the end of her life she would often borrow dresses from us instead of buying them,” said Cyrus during a walk-through on Monday before the opening. He said sometimes the royal would place her orders over the phone with minimal fuss and other times he and his wife would alter a dress — or make her a new one if the alteration proved too difficult.

Catherine Walker has the most outfits of any designer in another exhibition, at Kensington Palace, “Diana: Her Fashion Story,” which runs until Feb. 28.

The last room of the Spencer House show also includes designs from the Catherine Walker & Co. 20-piece fall 2017 collection. Pieces include statement coats with military flair, and day and evening dresses rich with lacework and embroidery. Every item of clothing is still made by hand across seven workshops in London’s Chelsea.

Cyrus added that he wanted the show, which was two years in the making, to mark each decade in the history of the couture house. He said he chose to end with the fall 2017 collection “to show that we’re forward facing. The next decade begins with this,” said Cyrus, sweeping his arm over the brand’s latest creations.

Money raised from the invitation-only ticket and catalogue sales will go to Brendoncare, the Hampshire-based elderly people’s charity, and SSAFA, the Armed Forces charity.