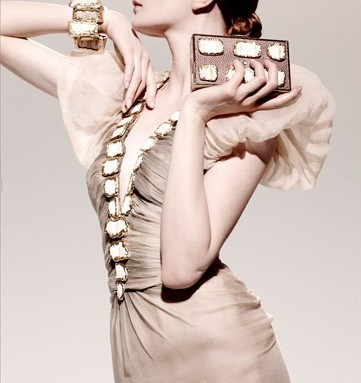 BY APPOINTMENT: Roberto Cavalli is launching a made-to-measure service for clients who want that certain cocktail, evening or wedding dress in tune with the spirit of the Italian fashion house. Called Roberto Cavalli Saint-Honoré, the service will offer entirely handmade dresses in a special private space above the Rue Saint-Honoré store. No more than 35 dresses are to be produced each year, with prices starting at 30,000 euros, or $41,950, for a cocktail dress. Roberto Cavalli’s wife, Eva, held a press conference in Paris Monday and stressed that the collection isn’t the start of a couture collection, but an extension of a service the house has been offering for red-carpet and other relevant events. “Clients who want a special outfit from Cavalli now will know that they can obtain it,” she said.

LADIES NIGHT: Count on Giorgio Armani to wrangle some heavy hitters for his couture show. Cate Blanchett, Isabelle Huppert, Megan Fox and Emmanuelle Béart are among VIPs expected in the front row at his Armani Privé show today.

AMERICAN REVOLUTION: The British Fashion Council is ramping up its efforts to lure American buyers and editors to London Fashion Week — and get them spending on British labels. The BFC, which is celebrating its 25th anniversary, has hired the American public relations company People’s Revolution to drive increased traffic to London, WWD has learned. The BFC also has been on a mission to draw British designers back to the capital for LFW, which runs from Sept. 18 to 22. So far, labels including Burberry, Matthew Williamson, Pringle, Jonathan Saunders and Jasmine de Milo are returning to London to show.

SUMMER RETREAD: Talbots has gotten another shout-out from Michelle Obama. The First Lady, who wore Talbots’ rose print silk dress on the cover of the May issue of Essence, sported the dress again for a long flight to Moscow Sunday. (She actually changed for her arrival into a peach Narciso Rodriguez dress). Talbots sold 3,000 of the rose print dress after Obama wore it on the Essence cover. The dress, which arrived in stores in April, was originally $169. There are still some dresses left at Talbots’ stores and on its Web site, but after the wave of spring markdowns, it’s now available for $89.99.

Meanwhile, J. Crew is planning a rush for a few of the items worn in Moscow the next day by Malia and Sasha Obama. Malia, 11, exited Air Force One decked in a J. Crew tan silk taffeta trench ($298) with black satin ballet flats ($98). Her sister, eight, wore a matching Crewcuts crushed twill trench ($169.99) and a pair of printed navy ballet flats ($108). But, as if one pair of ballet flats each just wasn’t enough, the girls also were spotted boarding the plane in Washington with Malia wearing her $98 satin flats while Sasha chose the crackle-metallic flats for $108.

GLASS ACT: “I lived in Paris for many years so it’s always, in a sense, a feeling of coming home,” said Oscar de la Renta, who drew crowds to L’Eclaireur’s Rue Boissy d’Anglas store Monday night on a fly-by visit to present his resort collection. Models paraded pieces from the line, including ruffled cotton shirts and embroidered bustier dresses, as de la Renta hobnobbed with guests. Sipping a glass of Champagne, Loulou de la Falaise, who designs de la Renta’s jewelry, presented a special couture jewelry line as an exclusive to the store. The 13-piece collection, which includes one-of-a-kind earrings, necklaces and bracelets crafted from colored glass and semiprecious stones, was inspired by Charles Baudelaire’s “Les Fleurs du Mal,” after which it is named.

“I love flowers, but thought it would be nice to do them a bit more twisted, darker and sensual, using techniques that are pretty but difficult to achieve,” said de la Falaise.

COUTURE ROOKIE: New to the Paris couture circuit, Lebanese designer Rabih Kayrouz will stage a presentation July 8 at his new Paris showroom-cum-studio, based in a former theater that, in 1953, presented the world premiere of Samuel Beckett’s “Waiting for Godot.” Kayrouz, who trained at Christian Dior and Chanel, opened his couture atelier in 1997 in Beirut. “At the time, the country was being rebuilt and all of my friends — architects, painters and filmmakers — were coming back,” he said, adding that he aims to host exhibitions by a number of Lebanese artists in his new Paris digs. Exploring a shadow and light theme, Kayrouz’s couture collection plays on architectural volumes that envelop the body using airy fabrics, such as dégradé crepes, silk organza and gauze. Certain looks, such as a white mohair wedding dress, come edged with white feathers to give a halo effect.

BOOK CLUB: On the eve of his couture show on Wednesday, Franck Sorbier will sign copies of a new book he art directed to accompany the 10-year retrospective of his work on display at the Musée des Tissus in Lyon, France. “It’s all about finding new ways of expression,” said Sorbier, who presented his last two couture collections online and via film. “Couture defends a kind of culture that is particular to Paris. It’s the last bastion of a certain independence of spirit.” Sorbier’s presentation will take place in Paris’ storied Harcourt photo studios, and the signing will occur at the L’Ecume des Pages bookstore in Saint Germain des Prés.

CHANNELING COLETTE: “Chéri” fans should head to the Galerie Mary Beyer glove store in Paris, where “Homage to Colette” pays tribute to the French novelist and former Palais Royal resident. The exhibition includes photos by Anne Garde taken in the author’s home just after her possessions were removed and showing ghostly traces of Colette’s belongings, such as the marks on walls left by her paintings. A display of a limited edition line of diamond-studded lockets by Edouard Pascaud, called “Precious Tales,” features portraits of Colette and her cat and pooch (Bâton and Toby), as well as unique guipure lace jewelry pieces and gloves by Beyer.

LAYOFFS AT SELFRIDGES: Selfridges might be getting a boost from its centenary celebrations and from a weaker pound, but it’s clearly not immune to the economic downturn. The store has laid off 13 of its 400-strong head office staff, including communications director Christine Watts, who joined in 2005. Her responsibilities have been assumed by Sally Scott, Selfridges’ marketing director. “This consultation was introduced to ensure Selfridges continues to be strong and efficient,” a Selfridges spokesman said. “This is an ongoing business goal.” According to a source, more layoffs may be in the pipeline. The store declined comment.

CASA NUOVA: Dan and Dean Caten are on the move. The twin designers behind Dsquared reportedly have purchased an old electricity building in Milan for the brand’s new headquarters. Located north of the city center, the sprawling 5,380-square-foot historic palazzo is set to house Dsquared’s creative and marketing teams as well as a catwalk space. The Caten brothers won’t have to wait long for fashion-friendly neighbors — Milan-based designer Neil Barrett also is said to be relocating his label in the same area later this year.