There was no place like Tavern on the Green in New York to commemorate the 70th anniversary of “The Wizard of Oz.” 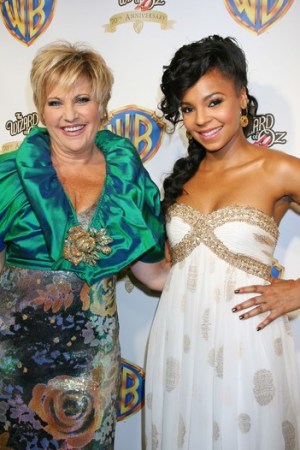 EMERALD CITY: There was no place like Tavern on the Green in New York to commemorate the 70th anniversary of “The Wizard of Oz” on Thursday night. The venue happens to be owned by Jennifer Oz LeRoy, granddaughter of the film’s producer, Mervyn LeRoy. Judy Garland’s daughter, Lorna Luft, also paid tribute to her family legacy on the red carpet-turned-yellow brick road, along with “The Wizard of Oz” national tour cast and five of the film’s original Munchkins. The event also marked the Blu-ray and DVD release of the movie’s 70th Anniversary Ultimate Collector’s edition from Warner Home Video. The Emerald Gala benefited the Elizabeth Glaser Pediatric AIDS Foundation via an online auction through Wednesday of the Ruby Slippers Collection, designer interpretations of Dorothy’s iconic talismans. “What is it about ruby slippers?” mused Jamie Luner of “All My Children” on her own vertiginous footwear. “It’s not only that they’re sparkly. All little girls, and some little boys, like sparkly things, but it’s more the fantasy. They can take you where you want to be.” Ashanti took a stroll down the yellow brick carpet in Marchesa and performed her new single, her own version of “Somewhere Over the Rainbow.” “I didn’t want to stray too far from the original. I just added my own little spice to it,” she said.

DRESSED FOR SUCCESS: Maria Pinto is doing her part for Chicago’s bid for the 2016 Summer Games. On Monday, the designer unveiled looks she created for the delegates making their final presentations to the International Olympic Committee this week in Copenhagen. Pinto’s mix-and-match capsule collection includes a sleek jacket, pants, blouse and dress all handcrafted in wool, cotton and silk charmeuse. “My goal was for the women to be able to personalize their look to match their individual styles,” she said.

NO DUCHESS: Contrary to published reports in the British press, sources at Tommy Hilfiger denied Monday the designer is cooking up any deals with Sarah Ferguson, Duchess of York. One insider said, “Reports that Sarah Ferguson and Tommy Hilfiger are contemplating working together are untrue. While Mr. Hilfiger and the duchess are friends, there is no proposed partnership of any kind planned or anticipated.”

LIMITED ENGAGEMENT: The last time a Limited store was seen in Manhattan was 1999. Now, after a 10-year absence, The Limited will make a brief appearance via a pop-up shop at 134 Spring Street in SoHo from Oct. 14 to 17. Forenza, the private label collection The Limited endowed with a romantic Italian-sounding name and fictitious designer, Maria Pia, is being relaunched at the pop-up before being rolled out. Leslie Wexner launched The Limited in 1963 as the cornerstone of his Limited Brands. But The Limited stores underperformed for years as other concepts, such as Victoria’s Secret, took off and captured more of Wexner’s attention. In 2007, Wexner agreed to transfer 75 percent ownership of the chain to Sun Capital Partners. Sun clearly sees potential in The Limited. Chairman and chief executive officer Linda Heasley has been working to refocus the merchandising strategy while gaining a better handle on customers’ needs.

KING KONG OPTIONAL: As a tribute to its growing business in the U.S., Italian footwear brand Geox introduced a limited edition collection for spring inspired by the Empire State Building. Each pump features a 5-inch heel, crafted in the shape of the iconic skyscraper, in gold, silver or appliquéd with rhinestones. The models feature the brand’s patented waterproof and breathable rubber sole and come in blue, gold, silver, fuchsia, red and bright green in either bold animal print patterns or sequins. In July, the company opened its largest store worldwide in New York on 29 West 34th Street.