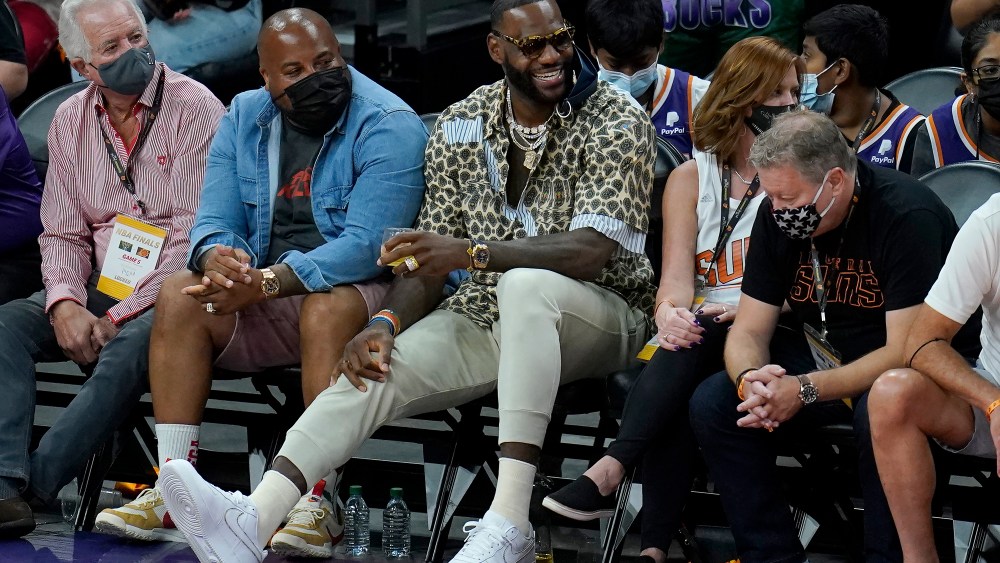 The NBA finals were back in full swing — and so were its star-studded appearances.

On Tuesday, the Milwaukee Bucks won Game 6 in their series against the Phoenix Suns, capturing the franchise’s second championship since their last one 50 years prior. Giannis Antetokounmpo, the two-time league Most Valuable Player, led his team to the title after falling short the previous years, edging out the Suns, led by Chris Paul and Devin Booker.

As the series went back and forth between Phoenix and Milwaukee, some A-list spectators attended the games to cheer on their favored teams. Earlier in the series, when the games were held in Phoenix, NBA legend Dwyane Wade and WNBA star Sue Bird made appearances, as well as NFL player Odell Beckham Jr. and even restaurateur Guy Fieri.

During Game 5 back in Phoenix, Vanessa Hudgens, who also kicked off the game by singing the national anthem in a neon orange blazer dress by Burberry, and rapper Lil Wayne attended. Grammy-winning singer Adele sat courtside next to NBA sports agent Rich Paul, who represents big names such as the Hawks’ Trae Young, Sixers’ Ben Simmons and Lakers’ Anthony Davis and LeBron James, the latter of which was also present.

For the final game, the NBA released a list of the celebrities expected to attend. Among the names were Chance the Rapper, comedian Chris Tucker, another NBA legend Julius Erving and even Kanye West. Though the majority of them were photographed, West was not.

"This is an amazing team. This is an AMAZING crowd."@ZoraStephenson interviews @chancetherapper: pic.twitter.com/2ddgJrqRth

West also made a major announcement during Game 6. West’s newest song “No Child Left Behind” was featured in a Beats by Dre commercial, which starred track and field star Sha’Carri Richardson. The clip also revealed that West’s latest album, called “Donda,” will be released this Friday.

The last NBA Finals were in October and held in the Orlando Bubble. The Los Angeles Lakers, led by James and Davis, bested the Miami Heat, led by Jimmy Butler, to take their 17th title, tying the Boston Celtics for most championships won by a team.

How Brands Activated for the Nontraditional NBA All-Star Weekend