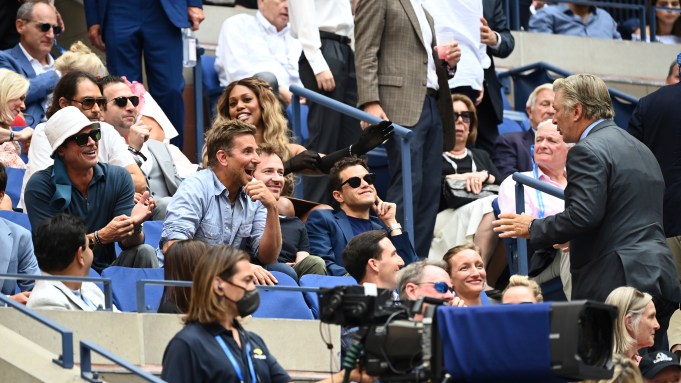 The 2021 U.S. Open saw a number of A-list frequenters as well as unexpected ones.

After two years, the famed tennis tournament welcomed enthused fans and celebrities alike back to their stadiums. Last year, due to health and safety concerns amid the pandemic, the U.S. Tennis Association hosted a U.S. Open with no guests in attendance.

Anna Wintour, editor in chief of Vogue, attended a number of matches, accompanied by her daughter Bee Shaffer, who is pregnant with her first child with husband Francesco Carrozzini, son of the late Franca Sozzani. Wintour watched the first few rounds of the tournament ahead of New York Fashion Week and the Met Gala.

Athletes also made the trip to Queens, N.Y., to cheer on some of their favorite players. Brooklyn Nets players Joe Harris and Blake Griffin were seen enjoying some honey deuce drinks during the match between Novak Djokovic and Holger Rune. Their coach, Steve Nash, was also seen that day, with his wife Lilla. Nash also made several other appearances throughout the tournament.

Other NBA players such as Jimmy Butler of the Miami Heat and D’Angelo Russell of the Minnesota Timberwolves also attended. NBA Commissioner Adam Silver watched the women’s singles championship between Leylah Fernandez and Emma Raducanu on Saturday.

Tennis stars Juan Martin del Potro and Maria Sharapova were also seen in their specific boxes watching their friends and competitors play. Sharapova decided to retire in February 2020, after 19 years on the Women’s Tennis Association. Del Potro, on the other hand, did not partake in this year’s tournament due to ongoing problems with a knee injury.

Socialite Paris Hilton took a break from fashion week duties to attend the men’s singles semifinal between Djokovic and Alexander Zverev on Friday, where they played her hit 2006 song “Stars Are Blind.” At the same match were “Law & Order: Special Victims Unit” costars Christopher Meloni and Mariska Hargitay, as well as Christopher Mintz-Plasse and “Succession” actor Nicholas Braun.

The last day of the tournament with the men’s championship match between Djokovic and Daniil Medvedev brought a slew of A-list stars. Seated together were Rami Malek and Hollywood’s favorite Brads: Cooper and Pitt. The camera even caught a friendly interaction between the three actors and Alec Baldwin, who approached them to converse.

Another surprising guest was Leonardo DiCaprio and Camila Morrone, who sat in the Grey Goose suite enjoying their honey deuce drinks.

Click through the gallery above to see some of the many celebrity moments at the 2021 US Open.

Celebrities at Wimbledon 2021: See All the Photos

Celebrities at the 2021 NBA Finals: See All the Photos