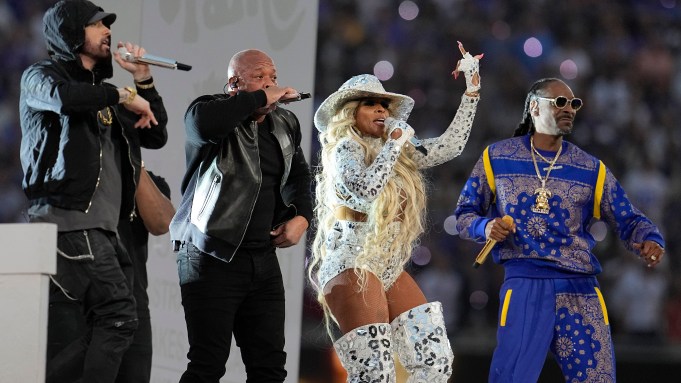 This year’s Super Bowl between the Los Angeles Rams and Cincinnati Bengals was a star-studded event.

Hosted in Los Angeles, it was only natural to see as many celebrities as one would at the average award show after party.

Mickey Guyton and Jhené Aiko kicked off the night by singing the national anthem and “America the Beautiful,” respectively.

Dwayne “The Rock” Johnson also made sure to energize the audience at the stadium with a speech.

“It’s time for all of us here and millions around the world to bear witness to these incredible players who will leave every ounce of sweat, guts and pride, and legacy on this hallowed field because that is what champions do,” the actor said. “Ladies and gentleman, it is my honor to say, finally, it is time for the Super Bowl.”

Players from the Los Angeles Lakers and Clippers showed up to cheer on their football counterparts. Clippers forwards Paul George and Kawhi Leonard were in attendance, as well as Lakers forward LeBron James. Seattle Seahawks quarterback Russell Wilson also watched.

Bron was going off at the halftime show 😂

Kendall Jenner and her boyfriend Devin Booker met up with Justin and Hailey Bieber for a double-date in one of the suites at the SoFi Stadium. Other A-list couples also included Jennifer Lopez and Ben Affleck and Cardi B and Offset, among others.

Artists Ty Dolla $ign and The Weeknd, who performed at last year’s Super Bowl halftime show, were seen taking pictures on the sidelines of the field. Jay-Z, his daughter Blue Ivy Carter, Drake and Usher were also spotted amongst the audience, as were Ciara and Vanessa Bryant, who snapped selfies together at the game.

Prince Harry, who relocated to California with his family last year, and his cousin, Princess Eugenie, were there. Kanye West was also seen amongst the audience, covering his face with a black mask as he sat with his children North and Saint West and NFL player Antonio Brown.

The highly anticipated halftime show, of course, was also an unforgettable lineup of musical artists who highlighted the significance of West Coast hip-hop.

Snoop Dogg and Dr. Dre, both of whom are native to L.A., kicked off the show with their iconic song “The Next Episode” before transitioning to “California Love,” which was originally performed by the late Tupac Shakur. The stadium then saw a surprise guest appearance from 50 Cent who rapped his hit song “In Da Club.”

Next up was Mary J. Blige, who took the stage in a dazzling custom, silver leopard ensemble by Peter Dundas, singing her songs “Family Affair” and “No More Drama,” before Kendrick Lamar, another native of L.A., came in hot performing in a custom look by Louis Vuitton as he rapped his hit song “Alright.”

Last but not least was Eminem, who performed his anthem to dedication, “Lose Yourself,” as the rest of the artists danced and sang along, including another special appearance by singer Anderson .Paak.

During the nearly 14-minute performance, audience members, both celebrities and normal people alike, were not shy about how much they enjoyed the throwback songs from the ‘90s to the early Aughts.

Click through the gallery above to see some of the celebrity appearances at the Super Bowl LVI.