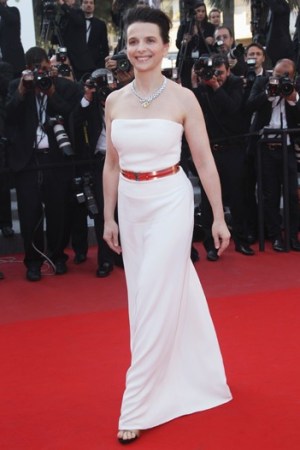 CELINE’S CANNES WIN: Celine’s chic minimalism has reached the red carpet. In Cannes on Sunday night, a radiant Juliette Binoche collected the Cannes International Film Festival award for Best Actress wearing a custom-made off-white silk crepe bustier gown accessorized with a pink gold metal belt, designed by Celine’s creative director, Phoebe Philo. Binoche stars in Iranian director Abbas Kiarostami’s Tuscan romance, “Certified Copy.” “It’s very [Phoebe], very graphic,” Binoche said of the gown from the LVMH Moët Hennessy Louis Vuitton-owned Celine. The French actress, who spoke to WWD at a dinner during the run up to the event’s closing ceremony, noted that the look is quite different from her usual style. As the face of this year’s festival poster, Binoche has paraded an array of custom-made designer looks during the 12-day event, which wrapped up Sunday. Lanvin’s Alber Elbaz, who designed Binoche’s entire wardrobe for “Certified Copy,” also created the custom-made draped gold lamé gown worn by Binoche to the movie’s premiere on May 18. Givenchy’s Riccardo Tisci, who said he regards Binoche as the best French actress today, designed an haute couture tuxedo for the actress to wear to the annual Vanity Fair party, worn with a feathered top from the house’s spring couture show, while Nina Ricci dressed Binoche for the W magazine and Style Star dinner on Friday. Harvey Weinstein, who made five movies with the actress, including “The English Patient,” for which she won an Oscar for Best Supporting Actress in 1996, said that on top of her good looks, Binoche radiates inner beauty. “It’s outwards and inwards — and the combination is delectable,” said Weinstein, who revealed to WWD that he is in talks to possibly stage a musical production of the film “Chocolat,” in which Binoche played the lead role. Peter Dundas, creative director of Emilio Pucci, who also made a few film festival frocks for the Gallic star, said of Binoche, “She’s a French icon. I’ve loved her since ‘The English Patient.’ She’s one of those women who embodies French cinema.”

AND THE OTHER WINNERS ARE…: Collecting one of two Best Actor prizes at the closing ceremony of the Cannes International Film Festival on Sunday for his role in Alejandro González Iñárritu’s “Biutiful,” Javier Bardem dedicated his prize in Spanish to “mi amor, Penélope Cruz,” who promptly burst into tears. Elio Germano was also awarded a Best Actor prize for his role in “La nostra vita,” directed by Daniele Luchetti. The Grand prize went to director Xavier Beauvois for “Des hommes et des dieux.” Charlotte Gainsbourg presented the festival’s coveted Palme d’Or award, which went to Thai director Apichatpong Weerasethakul for his film “Uncle Boonmee Who Can Recall His Past Lives,” about a man suffering from kidney failure. Weerasethakul in the past has collaborated with Louis Vuitton; his documentary, “Vampire,” was commissioned in 2008 for a Vuitton traveling exhibit.

BRUSH OFF: LVMH Moët Hennessy Louis Vuitton is looking to sell La Brosse et Dupont, maker of beauty and personal care products such as hair brushes and accessories, market sources said, confirming a report in French financial daily Les Echos. The luxury group has mandated corporate finance firm DC Advisory Partners to handle the sale of the firm, which is valued at around 50 million euros, or $62 million at current exchange rates, the newspaper reported on Friday, citing unidentified sources. A spokesman for LVMH said the company does not comment on rumors. As previously reported, LVMH is also mulling a possible sale of its Kenzo fashion house, although Les Echos cited one unidentified source close to the matter as saying this was unlikely to go through.

LUNCH BUNCH: Though event co-chair Sloan Barnett described it as “our little fabulous lunch,” the New York Presbyterian Lying-In Hospital’s annual midday fund-raiser, held Thursday at Cipriani 42nd Street, was anything but little. Sponsored this year by Dior, the event — which drew its usual crowd of well-heeled ladies such as Jamee Gregory, Coralie Charriol Paul and Lizzie Tisch — raked in $500,000. Certainly, organizers tried to make the cost of a ticket well worth it: After eating, guests saw a runway show of Dior’s pre-fall collection.

T-TIES: Naomi Campbell has teamed up with Moscow-based couture house Chapurin to create a line of T-shirts benefiting Neon, the not-for-profit organization she founded in April. The supermodel will also host a runway show and event on Tuesday to raise funds. Campbell aims to drum up at least $1 million for two Russian charities, the Iris Foundation and Northern Crow, which provide education, training and medicine for underprivileged children. Campbell’s companion is Russian billionaire Vlad Doronin.

PALIN’S TIMETABLE: Photographers covering Sarah Palin’s speech to the International Council of Shopping Centers’ convention in Las Vegas on Sunday had to be quick. The former Republican vice presidential candidate and governor of Alaska only allowed pictures of her to be taken from 1:25 p.m. to 1:35 p.m. The ICSC issued a memo on the time limits that screamed “no exceptions” in capital letters.

BIRTHDAY BOYS: Leave it Domenico Dolce and Stefano Gabbana to shake things up during Milan’s men’s fashion week in June. To celebrate the 20th anniversary of their men’s collection, the duo is preparing a glitzy event that will take place on the evening of June 19, the day of their spring-summer show. It will be housed inside Palazzo Marino, Milan’s town hall opposite the La Scala theater, and besides clothes, will display books and technology. It will open to the public the following day.

LAROCHE LUNCHEON: The Guy Laroche collection isn’t currently sold in the U.S. but that could be changing. The label’s Paris-based chief executive officer, Hendrik Penndorf, was in New York last week for business meetings and on Thursday organized a luncheon for Guy Laroche artistic director Marcel Marongiu at The Modern to introduce the label to the uptown crowd. Hosts for the affair were Lucy Sykes, Cristina Cuomo and Susan Shin, and the all-ladies guest list included Lisa Airan, Jackie Astier, Kimberly Guilfoyle, Amanda Ross, Ann Caruso, Caroline Zapf, Marisa Noel Brown and Bebe Neuwirth, who is currently starring on Broadway in “The Addams Family.” Sykes’ husband, Euan Rellie, gamely tried crashing the gender barrier but was politely discharged when invitee Jennifer Creel needed a seat.

POKING FUN AT HIMSELF: Lapo Elkann sure knows how to laugh off a gaffe. Last week, Italian basketball team Sigma Coatings Montegranaro donned “L.A. Lapers” T-shirts off-court as Elkann watched on. The entrepreneur’s brand, Italia Independent, designed the Ts after Elkann caused an incident during an L.A. Lakers-Toronto Raptors game in March. As captured by a spectator at the time, with about a minute and a half left in the game and the Raptors down by four points, the Fiat heir is seen deflecting a wayward ball with his hands, thus denying the team’s José Calderón the chance to keep it in play. The Lakers went on to win by two points, causing the media to joke that Elkann had won the game for L.A. Unfortunately, the T-shirts weren’t enough to give the Sigma Coatings a win, as they were beaten by the Armani Jeans Milano team — this time without the help of Elkann.

TUCKER CARLSON’S CROWD: There’s something arresting about a room full of men in bow ties, like a flock of a tropical birds alighting on Central Park: it’s beautiful but otherworldly. Wednesday evening provided unparalleled viewing when socialites and fashion editors swanned around the Brooks Brothers flagship in Manhattan to toast the retailer’s bow tie collaboration with etiquette blogger K. Cooper Ray. The blogger and bow-tie champion Ray set the tone in red go-to-hell pants and one of his own reversible ties. Guests, including Sam Peabody, Emma Snowdon-Jones, Phillip Bloch, Lucy Sykes and Euan Rellie, Bobby Kennedy Jr. and Paul Sevigny, followed his natty lead. Even Paper editor Mickey Boardman tweaked his polo-and-necklace uniform a bit, gamely holding a photo of a bow tie at his neck for a few photos. When you can’t beat them, pretend to join them.