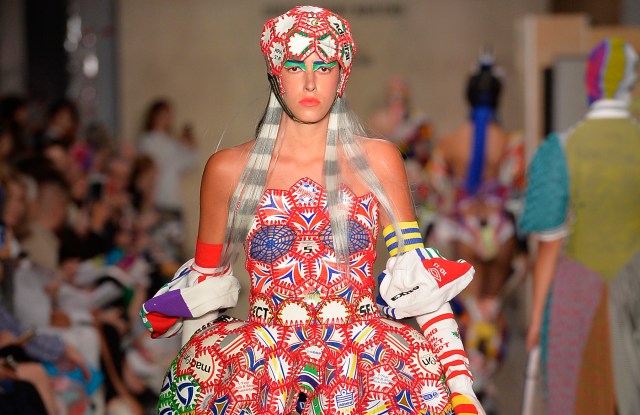 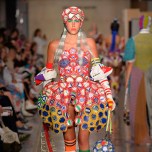 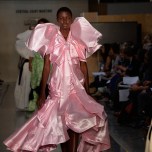 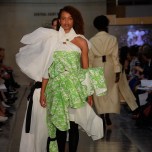 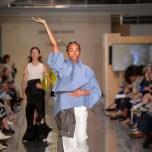 LONDON — Central Saint Martins unveiled its annual BA fashion show at the school’s 1Granary campus this week, showcasing works from 41 students. Their designs, ranging from the experimental to the political and conceptual, reflected the breadth of the students’ specializations, including women’s wear, men’s wear, print, fashion design, marketing and knitwear.

Paolina Russo won the L’Oréal Professionnel Young Talent Award. By the time she turned 21, Russo had already been photographed by Kendall Jenner for Love magazine, styled for the band Dream Wife and been named a muse of John Galliano.

The collection was a love letter to Russo’s Canadian hometown, with ensembles drawing heavily from contact sports. She weaved together elbow pads, shin guards and protective gear to create structured outfits, while the final look was a crocheted dress that resembled a soccer ball, albeit a beautiful, wearable one.

The three runners-up included women’s wear student Simon Valer Dacsef, who was also awarded the LVMH Grand Prix scholar prize for his lineup of voluminous flouncy dresses in a sea of bright greens, pinks and blues.

Alongside Valer Dacsef, Masha Popova was also awarded the LVMH Grand Prix scholar prize. She made a statement by sealing off her models’ mouths with wax and dressed them in a medley of distressed, gathered and ruched designs in bright fluorescent colors.

Inditex scholar Harry Turner was awarded the prize for his slouchy, long-line garments. An oversized layered blazer with hanging threads was the highlight.