The designs on display were by first- and second-year students from the two universities, both of which come under the University of Arts London umbrella. 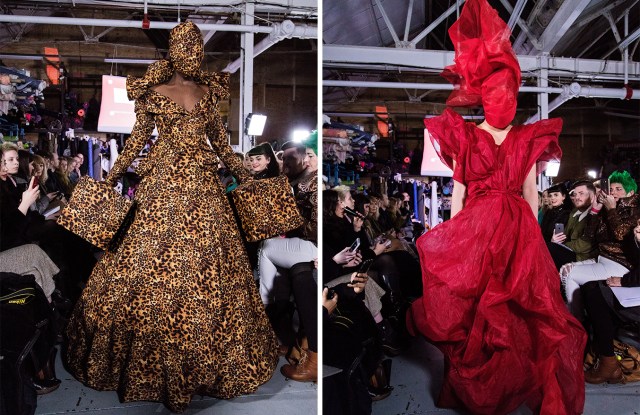 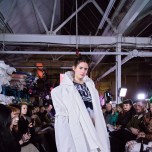 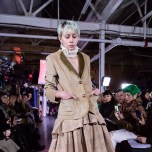 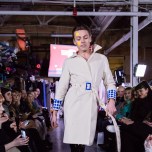 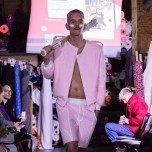 SHOW-IN: A group of students from Central Saint Martins and London College of Fashion took matters into their own hands this week, staging an independent fashion show at Cannon Street Jersey Fabrics in Tottenham Hale, London on Wednesday evening.

The showcase was funded by the designers and the show manager Michelle Hawkins. In addition, the students received a 200 pounds, or $249 grant, from the student union. “There aren’t many professional platforms to show student work,” said Di Salle. “So we decided to create our own. There are definitely talks of future collaborative work.” The presentation was simple but well organized, with bolts of fabric from the factory stacked around the room.

Di Salle’s collection looked to the Antarctic, non-functional protective gear and artwork by Matthew Barney and Lucy Orta. The range was filled with long, oversize white coats with shirred sleeves, and deconstructed knitwear pieces such as a black and white fitted cropped sweater worn with patchwork knit trousers with rolled-up cuffs.

Davies was inspired by her adventurer father, looking to his sea cadet days and their trips together motorbiking. She showed off a patchwork leather moto jacket with green pin-striped trousers. Davies said the show gave her a creative independence and the ability to show work outside institutional boundaries. “This creative platform has given me the confidence to continue expressing my creative practice,” she said.

Walsh took his cue from the Sixties housewife, using graphic polka dots on the sleeves and collars of a white belted trench. Wa looked to behavioral disorders, gypsies and art nouveau for his lineup, which included a beige corduroy blazer with brown lapels and a tiered knee-length plaid skirt.

Donald referenced 1900s American workwear and the femininity of upper-class English women as seen in an indigo denim jacket and matching skirt embellished on the edges with floral embroidery. Parnell, who was inspired by sugary baked treats, sent out a line done in warm, candy-coated hues such as a bubble gum pink quilted bomber jacket with matching shorts.

Mak, who closed the show, took his cue from the fluctuations in moods and feelings, ranging from mania and depression, for his range. It featured a theatrical display of long- and short-sleeve gowns with exaggerated proportions, or silhouettes done in a taffeta or leopard print. Mak’s looks have been featured on TV, in shows such as “X Factor,” “Absolutely Fabulous” and RuPaul’s “Drag Race.”