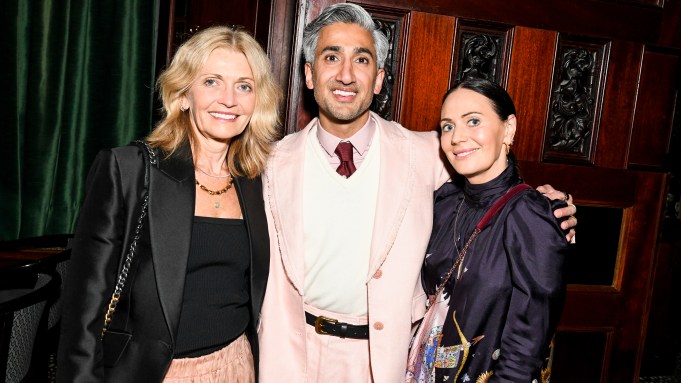 NEW YORK — Designers streamed into the newly reopened Temple Bar on Lafayette Street here Thursday night to meet and mingle IRL before embarking on their fashion shows and  virtual presentations.

The party was hosted by the CFDA and Afterpay, although Nick Molnar, cofounder and co-chief executive officer, didn’t make it because his plane from Australia was delayed due to mechanical issues.

Most of the designers appeared to have things under control for fashion week.

Taylor said she was having her virtual presentation Friday morning — she filmed it last week in East Hampton — but was feeling relaxed enough because a friend invited her to several fashion parties (Nordstrom and Saks Fifth Avenue) that night. Gage said she was excited because she was showing on the official fashion NYFW calendar for the first time. The Minneapolis native, who will have a presentation at Veranda on Grand Street on Tuesday, said she named her collection “Melke” because that’s how Midwesterners pronounce the creamy liquid. And Martins, who was also on the NYFW calendar for the first time and was showing Saturday at the Palace on Canal and West Broadway, said she was taking a break that evening to attend the party. “We’re doing hair and makeup and fittings tonight,” she said.

“I wish we were showing,” said Lippes, who decided four weeks ago not to have a fashion show during the throes of Omicron. When it came time to put down a deposit for a venue, he said, “I got too nervous with COVID-19. We’ll have a spring show [in September] for sure,” he said.

He tested positive for COVID-19 in early January, so ultimately he was glad he decided not to show. “But I have the best f–king team in the world. They finished the collection. We’re ready to go and did all the casting for the look book today,” he said.

Meanwhile, Lippes said he’s enjoying having two businesses going simultaneously. He also co-owns a cannabis brand, Farnsworth Fine Cannabis Co., a retail store in the Berkshires, and an e-commerce site, Farnswothfinecannabis.com. “We have lines out of the door,” Lippes said. “Having both has really been fun. Cannabis is a lifestyle now, and it affects my design sensibility. Cannabis lifestyle is all about ease and we were very dressed up. Now I’m mixing a jacquard long coat over sweatpants,” he said.

Steven Kolb, chief executive officer of the CFDA, said he was feeling good about the new show season. “It’s a really good mix of cool New York designers and more established ones. It feels fresh.”

What’s exciting to him is a lot of designers have chosen interesting venues, from Christian Cowan, who’s showing on the Observation Deck of One World Trade Center, to Christian Siriano, who’s in the promenade of the Empire State Building. Altuzarra is showing in the Woolworth Building, Brandon Maxwell is at Union Square East and Proenza Schouler at the Brant Foundation.

And how does he plan to get around town? “I love to walk if I can. I can take Citi Bike, or a Lyft or the kindness of others,” Kolb said.