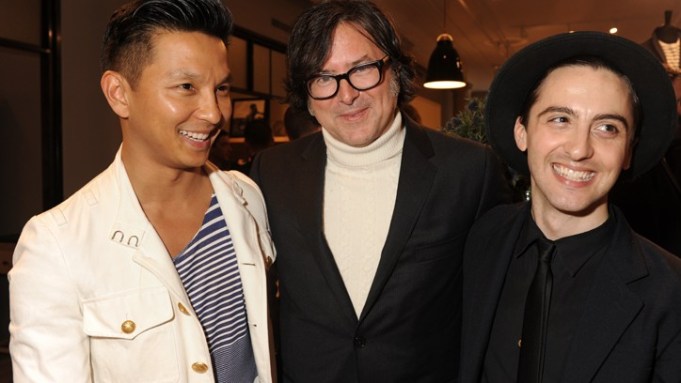 The jovial spirit extended to the entire party, which feted the CFDA/Vogue Fashion Fund, its 2010 winner Billy Reid, runners-up Gurung and Eddie Borgo and their limited edition collaborations with the multi-channel specialty retailer.

Reid is kicking off the three-month cycle with his men’s wear pieces, which arrive in select J. Crew stores and JCrew.com this week and run through May. Gurung’s women’s collection for J. Crew will be available in June, while Borgo’s jewelry designs will retail at J. Crew during the month of July.

This was the first design collaboration for Gurung. “It was good it’s a different market and a bigger audience, so being able to design something at that price point was fun,” he said. “It was something I always wanted to do.”

Reid found J. Crew to be the perfect collaborator. “They made it so easy for us,” he said. “The way we worked together just felt so right.” Reid clearly caught a collaboration bug of sorts. Today, he was scheduled to unveil a special sneaker for K-Swiss, which he pitched to the footwear company after owning a similar pair in his youth. “I am just excited to get them again,” he said.

CFDA executive director Steven Kolb, who served as a host that night, praised the initiative’s reach, which includes J. Crew’s online and catalogue business. “To have their merchandise shown to so many more people, and talked about with an editorial voice is very valuable to the designers,” he said.