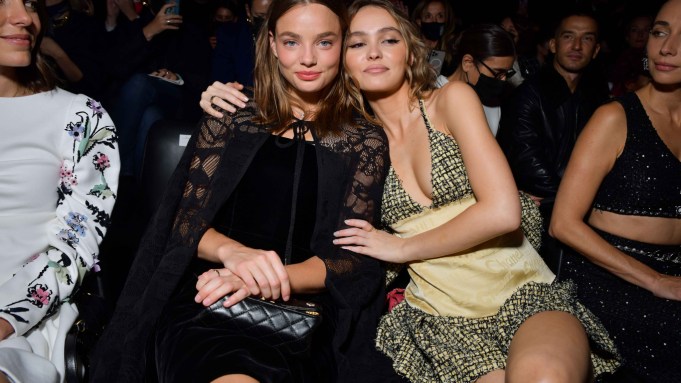 Kristen Stewart rocked pink hair at the Chanel show, where she stealthily slipped into the front row a few minutes late.

“We kinda let the clothes inform the hair today. A tweed suit can be quite ladylike, so I wanted to find a way to turn it inside out,” said the actress, who always injects a little bit of punk into her wardrobe.

The star is fresh off the Met Gala, where she dressed as a modern Barbie, and the Venice Film Festival with the triumphant premiere of her Princess Diana film “Spencer.”

While missing the “so human and genuine and basically f–king lovely” Karl Lagerfeld, she said working with Chanel creative director Virginie Viard has been an invigorating experience.

“She’s kind of a rock star. I feel like in another life she was on stage with a microphone, even though she’s so shy and kind of understated. She doesn’t want to just continue this idea of French femininity and ease and effortless elegance, she tells a very dynamic story.” When a rendition of George Michael’s “Freedom! ’90” blasted at the end, Stewart said she felt “enlivened.”

“I was genuinely moved because people within this industry have a tendency to feel a little bit on a leash and this just felt unleashed with these girls just flipping their hair around and laughing.”

Stewart experienced much of the same playfulness when starring as Diana, even though the film depicts a sad time in the princess’ life. “I wasn’t expecting to feel 10 feet tall. She had a God-given gift of connection. I got to taste that for a second and it felt amazing,” she said, ignoring any early awards season buzz with a typically nonplussed shrug.

Blackpink star Jennie and Stewart posed for selfies backstage. “I kinda am fangirling for her. I love her and I finally got to meet her, I’m so happy,” said Jennie, who called the ’80-inspired elevated catwalk “the most energetic show I’ve ever been to.”

“As a performer myself, I never get to be in the crowd and feel that energy, to get to be on the other side and see the beautiful models walking, it just brings back the energy that I’ve been missing for the last couple of years,” she said.

Blackpink hasn’t been able to perform in front of an audience due to COVID-19 restrictions, but the group held an online concert earlier this year. Rehearsals weren’t too different, she said, but the reality hit hard when the concert started. “Normally no matter how you feel in the morning, when you get on stage it’s just like, forget it, because you’re like communicating with the fans, but this time, it was hard. I was just looking into the camera so I was like focused on how I looked and how I was doing the whole time, so it was really different I think.”

Jennie is so looking forward to being in front of fans again that she’s been spending hours on YouTube. “I watch our old concert videos because I miss it so much; I want to feel that energy.” The star, who “had a dinner date” with bandmate Jisoo in Paris earlier this week, says they’re in the studio and promises new music “at the right moment.”

Kristine Froseth has been taking in the Paris sights while training for the New York City Marathon Nov. 7. “The architecture is incredible; it really takes my mind away from the pain,” she said of getting ready for her first race, which is raising money for the Shoe4Africa charity.

Froseth just finished a still-under-wraps film with Lena Dunham, and before that “The First Lady,” in which she plays a young Betty Ford against Michelle Pfeiffer. While the two didn’t have any scenes together, Froseth said she and Pfeiffer collaborated closely, reading books together and meeting with history professors to delve more deeply into one of America’s most enigmatic presidential wives.

“I love what she did with [establishing] the Betty Ford center and how she spoke about addiction and everything that women really didn’t talk about at the time. I’m in awe of how she navigated that,” she said. Working with supportive women such as Dunham and Pfeiffer has been a blessing this early in her career. “I have a lot of good female energy around me; I’ve been really lucky.”

It was not only Whitney Peak’s first time at a fashion show, but also the “Gossip Girl” star’s first time in Paris. “A lot of big firsts,” said the Vancouver native. “It was never really something that I even thought I could go to, and I’m glad I didn’t because this is really the way to do it for the first time.”

Peak joked that her biggest takeaway about French culture is the country’s dedication to dinner. “It takes really long to eat here, like four hours.” Currently staying in Rhode Island for a film shoot before she goes back to work on “Gossip Girl” in January, Peak said she’ll take the memories with her. “I’m just gonna be in my apartment, ‘Sigh, oh, I wish I was back in Paris.’”