Saatchi Gallery showcase is open to the public and runs until Nov. 1.

By Samantha Conti and Miles Socha
with contributions from Julia Neel
on October 12, 2015
View Slideshow 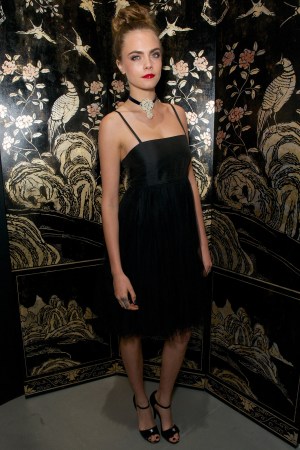 LONDON — Chanel is lifting the tweed veil on the creative process — and impulses — that keeps the house alive and thriving with a new exhibition that debuts at the Saatchi Gallery in London on Tuesday.

“Mademoiselle Privé” features gardens — inside and outside the gallery — by British landscape designers Harry and David Rich, gold medal winners at this year’s Chelsea Flower Show; re-editions of the high jewelry Bijoux de Diamants collection that Chanel created in 1932; and one-off couture pieces that Karl Lagerfeld created for house ambassadors, young and old.

There are early images of Coco herself — sailing and salmon fishing — and looking fabulous in Scottish tweeds, while a quirky installation with LED signs and giant cauldrons of rose and jasmine scented liquids tells the story of Chanel No. 5, the first fragrance bound to the image of a fashion designer.

Visitors can fondle their way through a maze of giant fabric swathes — hung from the ceiling in a variety of weights and textures — gaze at totems and installations representing the house codes — wheat, camellias, Chanel’s lucky numbers and the color red — and take part in educational workshops that focus on the details of creating fragrances, fabrics and clothing.

The sleek show — which comes to life with a custom-made app when a smartphone or iPad is pointed at the walls — culminates with a hilarious short film written and directed by Lagerfeld, and featuring himself and Geraldine Chaplin. It captures what this project is really all about — the twin engines of past and future, heritage and modernity that Lagerfeld straddles and fuels with his creative faculties.

“Karl, he’s deceptive in that he makes everything look so effortless, but there’s a tremendous intellect at work there,” said Julianne Moore, who was planning to don a sparkly gold gown for the opening party Tuesday night.

She also marveled how adroitly Lagerfeld managed the “two-shot” scene with Chaplin — not an easy configuration in Hollywood parlance.

Titled “Visite Nocturne,” the clip sees the ghost of Gabrielle Chanel, played by Chaplin, repeatedly telling Lagerfeld off – and the ponytailed designer fighting back with all his vigor. “You’ve taken away my door! This looks like the entrance to a bank safe – or a fridge!” Chanel hollers as she walks into Lagerfeld’s studio, all modernist in gleaming white lacquer and brushed silver.

Later during their lively argument, he tells her “I’m keeping you alive. After you left, the image of Chanel was not great. It was very limited, what you left behind.”

Chaplin, who has portrayed Coco in other Chanel films, told WWD that becoming a ghost presented a different challenge: “Karl was telling me ‘Stand up straight, run up the stairs. Because ghosts have no pain.’ So I kept thinking, this is her ghost who feels no pain — and can put up a good fight,” she said, adding that Lagerfeld asked her to improvise “a great fight” with him.

Chaplin added that the costume she wears in the film felt divine. “That jewelry feels so good, except you can’t go to the toilet because you always have these guards around you. I mean even if you wanted to steal a piece, it would be impossible because the clasps are so intricate,” she said.

Arriving at a preview party Monday night, guests meandered through the landscaped gardens to the sound of suspiciously late, but nonetheless charming, birdsong to the gallery’s steps. And, after making their way through the exhibition, arrived at the top floor, which had been made over into a trilogy of sumptuous rooms that formed the nucleus of the night’s frivolities.

In one room, designed to look like a sumptuous speakeasy, complete with billiard table and dark velvet furnishings, a sherbet pink-haired Lily Allen played a DJ set of songs, including Drake’s “0 to 100,” that might have had Mademoiselle Chanel grasping her pearls in shock at their colorful language. A chandelier made of crystal decanters was suspended over the bar, where white-jacketed bar tender shook martinis next to vast platters of lobsters.

In another, lit by pink lights, white leather armchairs were placed around glass tables made to resemble the shape of diamonds, while tall-hatted chefs dished up plates of sashimi and ceviche flavored by a mountain of fresh black truffles that sat in a bowl on the bar.

The cozy third room was wallpapered in a chinoiserie pattern similar to the one in Chanel’s apartment and Perrier-Jouet was served from yet another bar.

The corridors linking the rooms were lined with old-fashioned slot machines emblazoned with Chanel camellias, promising the chance of a 2.55 with a lucky turn but — it turns out — were just pretty temptations.

Lara Stone had hit the jackpot, if only for the night. “They’re all mine now,” she said, stroking the dazzling diamond necklace around her neck. The burly bodyguard behind her probably had other ideas.

After seeing the film of Lagerfeld being accosted by Chanel’s feisty ghost, Georgia May Jagger was musing on who she’d like to be haunted by. “I always had a crush on River Phoenix,” she said. “I wouldn’t mind meeting his ghost.”

Vanessa Paradis marveled that all the high jewelry pieces at the exhibition, alongside the outfits celebrities, including her and Moore, wore at the couture show last July, were displayed with no glass barriers — only infrared alarms that activate if a visitor gets too close.

Paradis was surprised to learn how superstitious the founder was, a quality she doesn’t share. “I just don’t like to speak about things before they happen,” she said, only hinting at a film project slated for the spring, and that she’s resumed songwriting.

Rita Ora said she’s wrapped her new album, due out in January to be followed by a tour  — costumes TBD. “I haven’t thought that far ahead,” she said, confessing to fatigue as she had lensed a campaign for her Adidas collection, her ninth, that morning at 5 a.m. near Elephant & Castle with her photographer friend Damon Baker.

Jemima Kirke was nursing a sore foot — injured in July while filming a scene for “Girls” in which she was only supposed to pretend to kick something. “After about 12 times not pretending, I really hurt it,” she said. “I’m really supposed to wear this horrible boot.”

While heels are verboten, her hands work just fine. Also a painter, Kirke is preparing for a solo show on the Lower East Side in February of portraits of “outsider women, women of color, women with D-size breasts,” she said, cupping her hands away from her chest for dramatic impact.

Alice Dellal, dressed in a pink tweed jacket, black fishnets and heavy boots, said she just completed a “zine” she entitled, “Ivana Humpalot,” borrowing a zinger from the Austin Powers film. It’s a compilation of photos she took during a recent trip to Moscow, having happened upon a number of weddings and other interesting women to document. “I went there with my dad for his birthday and we went to the Bolshoi. I love ballet,” she enthused.

Lily Collins is a fan, too, and recalled “the grace and elegance” of her ballerina grandmother, who dressed head-to-toe in Chanel. Collins, who was dressed in a black sweater with frothy cream-colored ruffles and a high collar, said she’s just wrapped Warren Beatty’s longtime-coming Howard Hughes film. “It’s about Hollywood in the Fifties, and it’s in post-production now,” said Collins, adding that she’s turning her attention to more “normal things,” being a bridesmaid in a friend’s wedding, spending time with another pal who just had twins, and ramping up her teen empowerment and antibullying activities.

Bruno Pavlovsky, Chanel’s president of fashion, said during an interview the aim of the exhibition — which was a year in the making — is to highlight the creativity of the brand. “It’s about what’s happening behind the scenes, how Lagerfeld is working with the patrimony of Mademoiselle Chanel.”

He said the house wanted to focus on haute couture, haute joaillerie, and Chanel No. 5 as the three enduring icons of the house, and how the brand “day after day resets those three icons, and views the relationship between its past and future.”

The show is the third for Chanel at Saatchi, after “The Little Black Jacket” in 2012, and a display of Sam Taylor-Johnson’s photographs of Chanel’s private apartment of 31 Rue Cambon in Paris in 2014. Pavlovsky said the brand is hoping to surpass the 160,000 visitors at “The Little Black Jacket,” with this latest show. It is slated to travel to Hong Kong next spring, and move to other cities.

As for the film, he said it was important that Chanel not take itself too seriously. “We are not very serious — and it’s our gift to London.”

At the show, which runs until Nov. 1, visitors can download a special app that makes the gallery’s ground floor rooms spring to life with background, quotes, and even images of Chanel’s Rue Cambon apartment.

There are also larger-than-life Lagerfeld photographs of Moore, Chaplin, Depp and others wearing the designer’s one-off creations made for them — as well as the diamond jewelry.

Chanel hosted a cocktail visit Monday night, and constructed a nightclub on the top floor of the gallery for a party featuring DJ sets by Lily Allen and a live performance by St. Vincent.

Pavlovsky divulged to WWD that Lagerfeld and the French house would stage their next cruise show in Havana on May 3.

He noted match the unexpected destination — where there are no Chanel boutiques — expresses freedom of the cruise season, with Chanel a pioneer in staging itinerant shows in exotic destinations. He also lauded the country’s rich culture, and the fact that it is finally opening up to the world.

“All this is very inspiring for the brand,” he said. “It’s a good moment.”