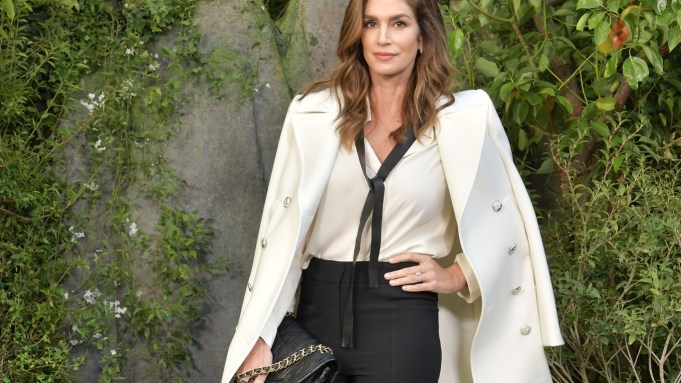 SHOW BUSINESS: “I’ve always maintained that if Karl [Lagerfeld] gave up his day job he’d be the world’s greatest opera director. He’s so great at the mise-en-scène, and creating gigantic operatic moments,” said Baz Luhrmann, who joined guests including Cindy Crawford, Vanessa Paradis and Monica Bellucci at the Chanel show Tuesday in the Grand Palais, presented against the backdrop of a vast waterfall set.

“He’s a brilliant stage director, he really is,” added Luhrmann, who said the scenery made him think of Niagara Falls but also his homeland, Australia. “That brown waterfall, and I love the way the water is shining in the sunlight this morning. It’s great that the Grand Palais has access to the outdoor environment because you can’t create that light — that looks so real up there. It’s brilliant. I guess with Karl, you always ask what’s next, how much bigger can it get?”

“Baz says it reminds him of Niagara Falls, I don’t know, I thought it was something [Asian] because of the shapes of the trees and the rock,” said Luhrmann’s front row neighbor, Mario Testino. “I was wondering who is throwing the water over the top,” he laughed. The photographer’s current projects include opening more playgrounds in his native Peru for Natalia Vodianova’s Naked Heart Foundation. A first opened last year and a second is due to open soon. “I hope that I can make as many as she has done,” he said.

Cécile Cassel said the decor reminded her of “The Lion King.” “I wanted to start singing ‘Circle of Life,’” said the singer-actress, whose new album, “Rather Than Talking,” is due out in a month’s time. “It’s still pop music, but it’s based on Nineties rock,” she said.

For Monica Bellucci, it was a moment of poetry and fantasy. “What is great is that it’s more than a show, with the water as a symbol of nature, and there’s so much light,” said the actress, who is due to start work on a movie by Australian filmmaker brothers Kiah and Tristan Roache-Turner. “For the first time, I’ll be playing a very mean woman — but it’s good to be a bitch once in a while. ”

“Just the sound of water as you walk in, that rushing sound, and the light streaming through to create a rainbow effect, it’s gorgeous,” said rising British actress Sophie Cookson, who is gearing up to start shooting Trevor Nunn’s “Red Joan,” starring Judi Dench. Cookson will play the younger incarnation of Dench’s character, based on Melita Norwood, a woman unmasked at age 87 as the KGB’s longest-serving British spy. “It’s set in Cambridge University in the Forties, and it’s loosely based on a true story of this woman who started working on the atomic bomb and then giving secrets to the Soviet Union,” said the actress, who is yet to meet Dench. “She’s just a legend, but luckily I’ll have to be slightly analytical so maybe that will take away some of the nerves.”

Inès de La Fressange saw the set as a nice gesture for the weary fashion crowd, meanwhile. “After New York, London, Milan and Paris, it’s so soothing to have some water and fresh air, it’s like being in the country,” said the Parisian icon, who in October will launch a book about men’s style. “It’s a gallery of portraits of Parisian guys of all types and ages, with interviews, addresses….”

Marine Vacth, Chanel’s newest ambassador, also enjoyed how transporting the set was, saying: “It’s quite something to see a waterfall in the Grand Palais. I feel like I’m in Asia or something, it’s very humid.”

After the show, Alma Jodorowsky raved about the collection’s plastic hoods and capes, saying, “You almost want it to rain.”

Mexican actress Tessa Ia had a deeper reading. “The impression that I took away from it is, obviously Chanel is for strong women but in this case I saw a woman who adapts herself to change, to climate change,” mused Ia, who stars in the soon-to-be-released movie “The Eternal Feminine,” about Mexican poet Rosario Castellanos. “[This season’s Chanel woman] is a woman who resembles water and who, no matter what adversity she faces, she will tear the rock face down and look for her own way of surviving.”