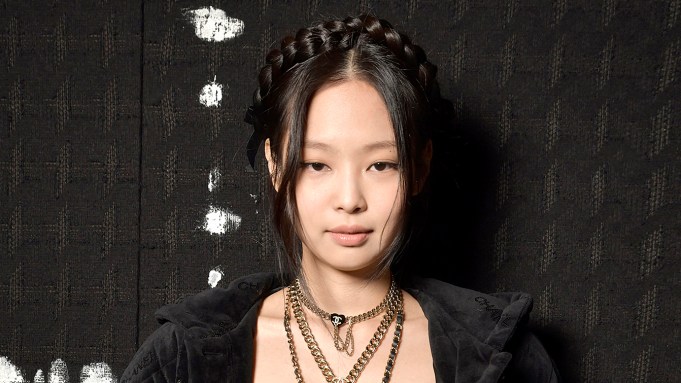 “We have the River Tweed right here,” said English actress Ellie Bamber with delight, gesturing to the blue-gray tweed runway that meandered in the Grand Palais Ephémère.

Bamber will be seen this year in Oorlagh George’s “Stranger With a Camera,” a drama focused on a young American woman uncovering her family’s IRA-tinged past, and a Disney+ and Lucasfilm series expanding on the story of 1988 fantasy movie “Willow.”

No spoilers ahead, but she mentioned that playing the character Dove had been an “empowering experience.”

Blackpink’s Jennie was likewise inspired to describe the Chanel set and the procession of tweed-clad models to a “beautiful lake,” after seeing the latest collection designed by Virginie Viard.

“For some reason, it gave me a back-to-school vibe,” said the K-pop star who had just arrived in Paris two days earlier for a busy schedule of shoots and Chanel that left her no time for her favorite activity — taking walks around town to see the sights — or to address recent rumblings on the impending return of Blackpink.

Also freshly arrived in town was model Soo Joo Park, who recently traded her ice blonde locks for a new black ombré hairstyle. She was fresh from Los Angeles, where she’s talking with music producers for her other day job, as musician Ether — expect an album by this fall, she revealed.

She was trading notes with fellow ANDAM jury member Caroline de Maigret…about the thigh-high boots they were both seeing as a fall must-have.

That said, designers looking to impress Park should note that what she is “looking for is a singular vision” rooted in their life experiences.

“If they’re obsessed with couture, it should be about craftsmanship. If it’s about them growing up in a certain part of the world, they should celebrate it as something that brings uniqueness for each person,” the Korean American model, who is “riding the wave, enjoying and being proud” of how Korean culture is becoming more globally recognized and appreciated.

For Algerian French actress Lyna Khoudri, her recent role in “Haute Couture,” where she played a young woman who finds a new path and career in the ateliers of a big Parisian house, certainly gave her a new reading on fashion shows.

“Before this movie, I was like just like a child just watching a fashion show. Now, I’m looking at the details on how they made it,” she said.

Although she joked that what she really wanted as her next project was a spot of lunch and perhaps a nap, she’s hard at work filming a new adaptation of the story of the Three Musketeers alongside Eva Green, Vincent Cassel and Romain Duris.

Film director Satchel Lee was eyeing the profusion of tweed with her eye on storytelling. “It’s interesting to see how [these pieces] are dropped on people’s bodies and how they themselves can recontextualize” a brand that could appear “established and very proper,” she commented.

Recently, Lee has become more interested in still images, portraiture in particular, with one of her father, award-winning filmmaker Spike Lee, featured on the cover of the Washington Post’s magazine earlier this year.

“I see myself more as a writer than a director, and I think with still images, you have one frame to communicate a story,” she explained, noting that she preferred the complexity of 35mm film to the ease of digital snapshots because it “is slower and [creates something] more intimate between me and my subject.”

She is particularly interested in capturing people of color, particularly for the conversations it opened up to challenge biases and preconceived notions in those viewing her work. “My subjects are mostly Black and brown — and queer — people, because that’s who I am and that’s who I want to see, as a reflection of who I am,” she said.