“Turn to me and laugh,” Karl Lagerfeld can be heard saying as his camera records model Lara Stone trying on clothes in a five-minute movie. 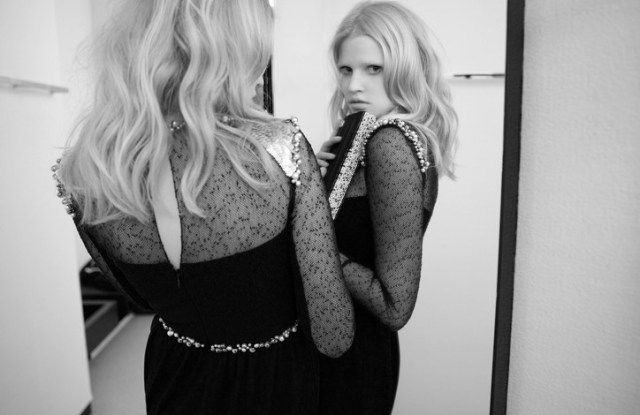 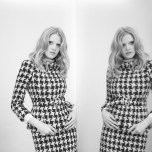 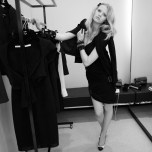 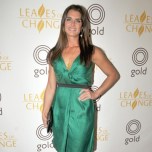 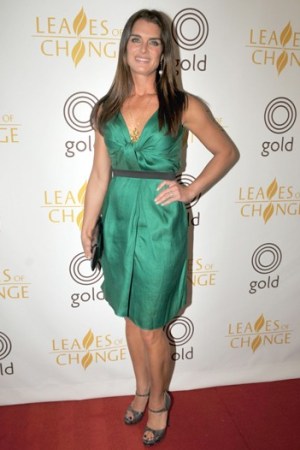 IF THE SHOE FITS: “Turn to me and laugh,” Karl Lagerfeld can be heard saying as his camera records model Lara Stone trying on clothes in a five-minute movie that just went live on chanel.com. In “Fitting Room Follies,” also featuring model Baptiste Giacobini, Lagerfeld employs a freewheeling filmmaking style common in French cinema in the Fifties: with abrupt cuts, continuous takes and the director’s presence felt throughout — verbal instructions included. “You can move, you can do whatever you like,” the designer calls out to Stone in his rapid-fire parlance, as she tries on tweed suits, two-tone shoes and costume jewelry from Chanel’s pre-fall collection. After fiddling with a pearl necklace, jazz humming in the background, Lagerfeld intones: “And now you remove it, and let it fall to the floor.”

GOLD LEAF: Marcia Gay Harden and Brooke Shields were just two of the celebrities that stopped by the Leaves of Change charity auction on Thursday night to take in their finished work. The World Gold Council paired 12 actors, including Shields, Harden, Christina Applegate, Debra Messing and Whoopi Goldberg, with a dozen fine jewelry designers who collaborated with them on a leaf-inspired piece to be auctioned off for various charities. Brooklyn, N.Y., fine jeweler Annie Fensterstock’s pendant made created along with Goldberg was one of the top sellers to raise fund for Ronald McDonald House. The event raised nearly $20,000 for charities such as the Make-a-Wish Foundation, Youth Aids and Waterkeeper Alliance.

RALPH’S READING ROOM: The Ralph Lauren store on Robertson Boulevard in Los Angeles pulled in an uncharacteristically young crowd on Sunday when Julianne Moore hosted a signing of her second children’s book, “Freckleface Strawberry and the Dodgeball Bully.” The event proved quite competitive with the traditional Mother’s Day brunch, as a crowd of about 70 lingered in the store around noon to hear Moore read from her book. “As a mother, you have to read your kids a lot of these books, so it’s fun to get involved in the process. I’ve had such a good time with this,” said a Lauren-clad Moore of her creative inspiration. “This book is about becoming self aware and that realization in childhood. The title is my nickname, and I hated my nickname when I was seven years old. At that age, I tried to get rid of my freckles and I hated dodgeball — I still hate dodgeball.” Moore has written a third kids’ title, with a publication date to be determined. Actresses and fellow moms Laura Dern, Milla Jovovich and Jessica Capshaw made cameos with their kids at the gathering, where cupcakes were in abundant supply and the elementary school set enjoyed balloon art and face painting.

CANDIDATE ACKMAN: As the line between government and business continues to blur, one hedge fund investor is taking his cues from the political sphere and sharpening his stump speech. Activist investor William Ackman made another personal appeal to Target Corp.’s shareholder’s Monday, this time vying for a seat on the retailer’s board and advocating for four other outside directors with expertise in corporate governance, retail, credit cards and real estate. “I just want independent, fresh perspective on the board,” said Ackman in a presentation to more than 100 analysts and investors in Midtown Manhattan, which was also carried over the Internet. The last time Ackman took that particular stage he needled Target to spin off the land under its stores, an idea shot down by the retailer’s board last year. If elected, Ackman asserted, “I’m going to raise my hand and say, ‘Look, I think it’s worth another look.…I think there’s something here on the real estate side.” He also took aim at the firm’s insular culture, the board’s nominating process and a lack of stock purchases on the part of management. Through his Pershing Square Capital Management, Ackman controls about $1 billion of the company’s common stock, a 3.3 percent stake, and options to buy another 4.5 percent of its shares. “We’re not the evil outsider,” Ackman said. “The company has attacked me only for being Bill Ackman.” The retailer responded and kept Ackman out of it. “We believe that the real reason that Pershing Square launched this proxy fight is because Target did not agree with Pershing Square’s risky real estate agenda,” said a statement from Target.

MALANDRINO HOUSE CALL: Los Angeles’s La Cienega Boulevard has long been known as an interior design corridor, but the opening of boutiques by Catherine Malandrino, Opening Ceremony, Neil Lane and Monique Lhuillier (at the intersection of Melrose Place) has started to change the neighborhood landscape. On Saturday, as part of the annual Legends of La Cienega design event, Malandrino landed in Los Angeles to host a fashion show and participate in a Pop Art panel at her Malandrino Maison store. “It’s more like an environment than a store,” she said of the space, which houses a garden and cafe. “I wanted to create a space for customers without the pressure of having to shop.” Though the designer said her mission in life was “to dress women so they feel stronger and better,” she’s also branching into interiors. So many shoppers have inquired about the glass and mirror installation at the front of the store that she has decided to mass produce and sell it.